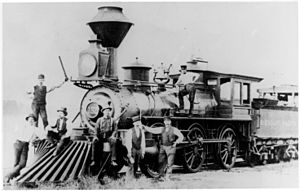 The Missouri Pacific Railroad (reporting mark MP), often shortened to MoPac and called The Mop, was one of the first railroads in the United States west of the Mississippi River.

All content from Kiddle encyclopedia articles (including the article images and facts) can be freely used under Attribution-ShareAlike license, unless stated otherwise. Cite this article:
Missouri Pacific Railroad Facts for Kids. Kiddle Encyclopedia.