Kids Encyclopedia Facts
Not to be confused with Royal American. 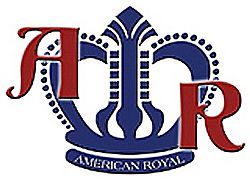 The American Royal is a livestock show, horse show, rodeo and barbecue competition held each year in September – November at various sites in the Kansas City Metropolitan Area. The Future Farmers of America (now the National FFA Organization) was founded during the annual Royal. The Kansas City Royals professional baseball team derive its name from the Royal. 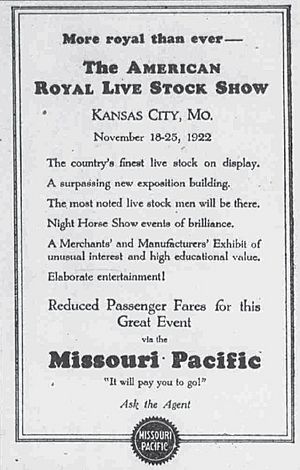 Newspaper ad for the 1922 version of the Royal.

In 1926, the American Royal invited vocational agriculture students to judge livestock. During the 1928 American Royal, 33 of the students meeting at the Baltimore Hotel in downtown Kansas City formed the Future Farmers of America. Now, the National FFA Organization has 579,678 members. The group proceeded to hold a convention every year during the Royal in Kansas City until 1998. The original home of the American Royal was destroyed by fire in 1925 during an Automobile Show. The structure was rebuilt in time for the event that year and served as the center for events until the American Royal complex was built across from Kemper Arena in 1992. During World War II, the Royal complex was converted into a glider factory. 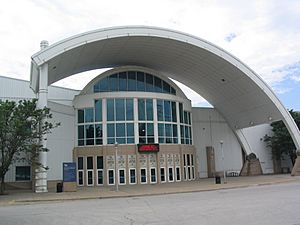 The new American Royal Complex was constructed in 1992 to replace the outdated facility constructed in 1926. The complex was designed by the architecture firm Black and Veatch and constructed by Walton Construction. The new complex consists of a museum and visitor center, three exhibition halls, Hale Arena, a theatre, a full-service restaurant and concession stand, as well as the administrative offices. In 1993, the new facilities were flooded but was restored in time for the American Royal livestock shows to continue that autumn. Hale Arena has since replaced Hy-Vee Arena and the Sprint Center as arenas where the livestock and rodeo shows are held each autumn. The barbecue competition had been held on the complex grounds, but was moved to the Arrowhead Stadium parking lots in 2015 and then to Kansas Speedway in 2016.

The American Royal is an annual eight-week season of barbecue competition, rodeos, livestock shows, equestrian events and agricultural activities benefiting youth and education. One of Kansas City's premier fall events with annual economic impact of more than $62 million, the Royal hosts the world's largest barbecue contest, one of the Midwest's largest livestock exhibitions, one of the top five ranked rodeos in the nation, and is home of the national championship horse competition.

The American Royal is a not-for-profit, community volunteer-based service organization which raises funds to fulfill its vision & mission through endowments contributions, sponsorships and event revenues.

In 2005, the organization contributed more than $1.3 million in financial support in the form of scholarships, educational awards, educational programs, community donations, competitive awards and prize monies and premiums.

All content from Kiddle encyclopedia articles (including the article images and facts) can be freely used under Attribution-ShareAlike license, unless stated otherwise. Cite this article:
American Royal Facts for Kids. Kiddle Encyclopedia.