Parsons was named after Levi Parsons, president of the Missouri–Kansas–Texas Railroad. The town was founded in 1870 and incorporated the following year. It soon became a major hub for several railroads including the Missouri Kansas & Texas Railroad, Parsons & Pacific Railroad, Kansas City & Pacific Railroad, and the Memphis, Kansas & Colorado Railroad. During World War II it was home to the Kansas Ordnance Plant, which later operated for some years as the Kansas Army Ammunition Plant. In Spring of 2005, the munitions plant was placed on the BRAC list for closure. The community has rallied behind the current plant operator, Day and Zimmerman, to keep the company on the grounds after closure and to keep those jobs and more in the Parsons area. (See link to "Great Plains Industrial Park" in "External Links", below) Parsons is also home to the Parsons State Hospital & Training Center, which has been in operation since 1903 when it was opened as the Kansas State Hospital for Epileptics. 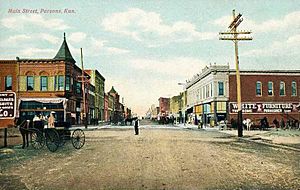 In 1957 the hospital was renamed Parsons State Hospital and Training Center. At that time it began providing programs for individuals with developmental disabilities. The Hospital occupies 43 buildings on 163 acres (0.66 km2). The hospital also includes residential services, the University Center on Developmental Disabilities and the Parsons Research Center for the University of Kansas, the Special Purpose School of the Southeast Regional Education Service Center. The Southeast Kansas Agricultural Research Center of Kansas State University is also located on the grounds, as is the Alzheimer's Association, Heart of America Chapter, Southeast Kansas Regional Office.

The first library began as a subscription library in 1904 and was located in city hall. Parsons Public Library, a Carnegie library, opened on May 18, 1909. A new library opened on April 18, 1977, and its former building has since been renovated to become a visual and performing arts center.

The sale of Katy Industries to Union Pacific, in 1988, eventually saw the loss of scores of railroad jobs and, in effect, severed a major part of Parsons' city history which stretched back to its 1871 incorporation. While, in return, the city received a million dollars to help it recover (and so that it would not file lengthy paperwork opposing the sale and thus delaying it), that money is kept in a fund by the city government, which uses the accrued interest on economic development projects. The only reminder of the Katy Railroad is now found in the local historical society's museum and of course the tracks, over which trains now speed through Parsons. The Kansas Army Ammunition Plant also was down scaled in the 1980s.

On April 19, 2000, an F3 tornado cut a devastating path of destruction through the center of Parsons. Eight hundred homes, one hundred twenty businesses, and hundreds of vehicles were destroyed or damaged.

On June 5, 2006 the National Trust for Historic Preservation named Parsons a 2006 Great American Main Street Award winner for its successful efforts in revitalizing its downtown area through historic preservation. The award was presented during the 2006 National Main Streets Conference in New Orleans. Parsons was one of only five cities receiving the 2006 award.

The motion picture ZombieGeddon (2003) was filmed in Parsons in July 2002.

The Kansas Army Ammunition Plant (KSAAP) is located southeast of the city. The facility was completed in 1942 to support World War II operations and consists of 21 separate facilities over 13,727 acres (55.55 km2). The installation is actively used as a munitions loading, assembly, and packing facility.

There were 4,351 households of which 30.7% had children under the age of 18 living with them, 38.1% were married couples living together, 15.7% had a female householder with no husband present, 5.7% had a male householder with no wife present, and 40.6% were non-families. 34.4% of all households were made up of individuals and 12.7% had someone living alone who was 65 years of age or older. The average household size was 2.33 and the average family size was 2.95.

There were 4,738 households out of which 30.8% had children under the age of 18 living with them, 43.3% were married couples living together, 13.2% had a female householder with no husband present, and 38.6% were non-families. 33.8% of all households were made up of individuals and 14.8% had someone living alone who was 65 years of age or older. The average household size was 2.32 and the average family size was 2.96. 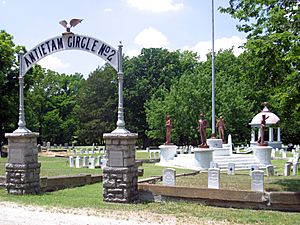 All content from Kiddle encyclopedia articles (including the article images and facts) can be freely used under Attribution-ShareAlike license, unless stated otherwise. Cite this article:
Parsons, Kansas Facts for Kids. Kiddle Encyclopedia.