U.S. Route 400 (US 400) is a 481.306-mile-long (774.587 km) mostly east–west U.S. Highway. It was created in 1994. The highway's western endpoint is in Granada, Colorado, at an intersection with US 385. The highway's eastern endpoint is southwest of Joplin, Missouri, near Loma Linda, at an interchange with Interstate 44. It originally ended in Garden City, Kansas; in 1996 it was made longer to its current western endpoint. Its route number does not follow the usual AASHTO numbering scheme, as there is no "parent" US 0.

US 400 begins in Granada at an intersection with US 385. It then goes along with US 50 through Holly east to the Kansas border. 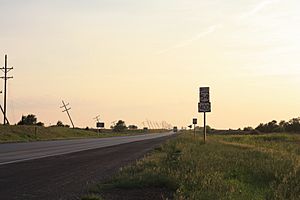 US-400 goes east through several small towns before turning southeast to go through the Fredonia area. It intersect US-75 at Neodesha. After going along with US-75, it turns east. It intersects U.S. Route 169 near Morehead and then US-59 near Parsons. Then it intersects US-69 south of Pittsburg. It then turns south with US-69. At Crestline, it follows US-69A south to Riverton. US-400 then turns east with US-166 at Baxter Springs. The two highways go eastward into Missouri.

All content from Kiddle encyclopedia articles (including the article images and facts) can be freely used under Attribution-ShareAlike license, unless stated otherwise. Cite this article:
U.S. Route 400 Facts for Kids. Kiddle Encyclopedia.