Greensburg is a city in, and the county seat of, Kiowa County, Kansas, United States. As of the 2010 census, the city population was 777.

In the evening of May 4, 2007, Greensburg was devastated by an EF5 tornado that traveled rapidly through the area, leveling at least 95 percent of the city and killing eleven people between the ages of 46 and 84.

Greensburg today stands as a model "green town", often described as the greenest in America. The hospital, city hall, and school have all been built to the highest certification level issued by Leadership in Energy and Environmental Design (LEED). Greensburg is also home to the world's largest hand-dug well.

The first settlement was made at Greensburg in 1885. Greensburg was named for D. R. "Cannonball" Green, who owned a stagecoach company and who helped to form the city. 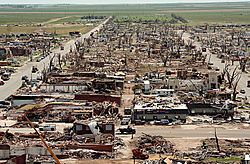 At 9:45 p.m. CDT on May 4, 2007, during a deadly tornado outbreak, Greensburg was hit by an EF5 tornado. The tornado was estimated to be 1.7 miles (2.7 km) in width — wider than the city itself — and traveled for nearly 22 miles (35 km). Ninety-five percent of the city was confirmed to be destroyed, with the other five percent being severely damaged. The National Weather Service estimated winds of the tornado to reach 205 mph (330 km/h). This was the first tornado to be rated EF5 since the update of the Fujita scale and the first "5" classification since May 3, 1999, when an F5 tornado ripped through Moore, Oklahoma, as part of the 1999 Oklahoma tornado outbreak. Tornado sirens sounded in the city twenty minutes before the tornado struck, and a tornado emergency was issued, which undoubtedly saved many lives. Kansas Governor Kathleen Sebelius and President George W. Bush both declared Kiowa County a disaster area, which opened up the affected areas for national and international aid. The tornado took 10 lives in Greensburg and two more in neighboring towns. While some rebuilding was done, the population by 2010 was about 50% of what it was in 2000, as the 2000 census found 1,574 residents, while only 777 were recorded in the 2010 census.

After the tornado, the city council passed a resolution stating that all city buildings would be built to LEED - platinum standards, making it the first city in the nation to do so. Greensburg is rebuilding as a "green" town, with the help of Greensburg GreenTown, a non-profit organization created to help the residents learn about and implement the green living initiative. The city's power is supplied by ten 1.25 MW wind-turbines. Carbon offsets generated from the turbines are being managed by NativeEnergy, and have been purchased by charter supporters including Ben & Jerry's, Clif Bar, Green Mountain Coffee Roasters, and Stonyfield Farm.

The climate in this area is characterized by hot, humid summers and generally mild to cool winters. According to the Köppen Climate Classification system, Greensburg has a humid subtropical climate, abbreviated "CFA" on climate maps.

There were 355 households of which 24.8% had children under the age of 18 living with them, 48.2% were married couples living together, 8.2% had a female householder with no husband present, 3.4% had a male householder with no wife present, and 40.3% were non-families. 36.9% of all households were made up of individuals and 16.3% had someone living alone who was 65 years of age or older. The average household size was 2.18 and the average family size was 2.83.

There were 730 households out of which 23.8% had children under the age of 18 living with them, 53.3% were married couples living together, 6.2% had a female householder with no husband present, and 37.9% were non-families. 35.9% of all households were made up of individuals and 19.9% had someone living alone who was 65 years of age or older. The average household size was 2.14 and the average family size was 2.76.

Greensburg is home to the world's largest hand dug well. Work had begun on the well in 1887 to provide water for the steam engines of the Atchison, Topeka and Santa Fe Railway and Chicago, Rock Island and Pacific Railroad. When the well was completed in 1888 it was 109 feet (33 m) deep and 32 feet (9.8 m) in diameter. The well was used as the city's water supply until 1932. In 1939 it was opened as a tourist attraction allowing visitors to descend to the bottom of the well. The adjacent museum displayed a 1000-pound pallasite meteorite until the museum fell down around the meteorite during a 2007 tornado that destroyed the city. The Well was not destroyed, and the meteorite was found in the rubble of the museum and moved to a temporary home in Hays before Greensburg could reclaim it. As of January 2011 the meteorite is back in Greensburg on display in the new City Hall until the new Big Well Museum is built.

The town serves as a time station for the annual Race Across America, a 3,000 miles (4,800 km) transcontinental bicycle race.

US-183. Bus service is provided daily eastward towards Wichita, Kansas and westward towards Pueblo, Colorado by BeeLine Express (subcontractor of Greyhound Lines).

All content from Kiddle encyclopedia articles (including the article images and facts) can be freely used under Attribution-ShareAlike license, unless stated otherwise. Cite this article:
Greensburg, Kansas Facts for Kids. Kiddle Encyclopedia.