Garden City is a city in and the county seat of Finney County, Kansas, United States. As of the 2010 census, the city population was 26,658. The city is home to Garden City Community College and the Lee Richardson Zoo, the largest zoological park in western Kansas.

The original townsite was laid out on the south half of section 18 by engineer Charles Van Trump. The land was a loose, sandy loam and covered with sagebrush and soap weeds, but there were no trees. Main Street ran directly north and south, dividing William D. and James R. Fulton's claims. As soon as they could get building material, they erected two frame houses. William D. Fulton building on his land, on the east side of Main Street, a house one story and a half high, with two rooms on the ground and two rooms above. This was called the Occidental Hotel. William D. Fulton was proprietor. No other houses were built in Garden City until November 1878, when James R. Fulton and L.T. Walker each put up a building. The Fultons tried to get others to settle here, but only a few came, and at the end of the first year there were only four buildings.

Following a sustained drought, irrigation arrived in Finney County in 1879, with completion of the "Garden City Ditch". The ditch helped to launch an agricultural boom in southwestern Kansas.

Charles Jesse Jones, later known as "Buffalo" Jones, arrived in Garden City for an antelope hunt in January 1879. Before Jones returned home, the Fulton brothers procured his services to promote Garden City, and especially in trying to influence the Atchison, Topeka, and Santa Fe Railroad to put in a switch station. The railroad agreed to place its station at Garden City. In the spring of 1879, more people began arriving to homestead in the area. During the years of 1885-1887, a rush was made for Western Kansas, and a settler arrived for every quarter section. The United States Land Office also located at Garden City, and people went there to make filings on their land. Lawyers also arrived in Garden City. I.R. Holmes, the agent for the sale of lands of the ATSF, and Holmes' partner, A.C. McKeever, in 1885 sold thousands of acres of railroad and private land.

The streets of Garden City were crowded with horses, wagons, buggies and teams of oxen. Long lines of people stood out in the weather awaiting mail at the post office, and there was always a crowd in front of the land office. During the height of the boom the town had nine lumber yards. Lumber was hauled in all directions to build up inland towns and to improve the nearby homesteads. Thirteen drug stores were in operation, and the town had two daily newspapers. Nearly everyone used kerosene lamps, and a few were placed on posts on Main Street. There was no city water works, so all depended on shallow wells, which were strongly alkaline. Passenger trains of two and three sections arrived daily, loaded with people, most of whom got off at Garden City.

The first issue of "The Garden City Newspaper" appeared April 3, 1879. Three months after the paper was established, the editor stated, "There are now forty buildings in town." When the first telephone line was built, trees were growing on both sides of Main Street. These interfered with the wires, but local residents knew the value of trees in Western Kansas would not allow them to be cut, and the telephone poles were set down the center of the street. The first long-distance telephone service from Garden City was a line nine miles (14 km) long, built in 1902.

In the 1970s, Garden City decided (after some debate) to allow a meatpacking plant to be built there. This helped to invigorate the economy, which continued into the 21st century. Many new residents arrived, but even with population growth the unemployment rate was only about 3% in 2017. Many of the new arrivals were immigrants from outside the United States (Burma, Somalia, Vietnam, and other places, particularly Mexico and Latin America), such that over 48% of the 2010 population was Hispanic, and less than 40% of the population was non-Hispanic white. The integration of this large immigrant population into the community was generally harmonious and amicable.

In October 2016, Gavin Wright, Curtis Allen, and Patrick Stein were discovered to have plotted a bombing attack on a housing complex that was home for part of the town's Somali community. An Islamic mosque was targeted in the same complex. The FBI arrested the trio on October 14. The trio has been charged in federal court with threatening to use weapons of mass destruction, namely explosives. The suspects came from the communities of Liberal and Wright.

The city lies on the north side of the Arkansas River in the High Plains region of the Great Plains.

Garden City has a semi-arid steppe climate (Köppen BSk) with hot, dry summers and cold, dry winters. On average, January is the coldest month, July is the hottest month, and June is the wettest month.

Garden City receives 19.47 inches (495 mm) of precipitation during an average year with the largest share being received from May through August. The average relative humidity is 62%. There are, on average, 72 days of measurable precipitation each year. Annual snowfall averages 24.1 inches (61 cm). Measurable snowfall occurs an average of 8.5 days a year with at least an inch of snow being received on six of those days. Snow depth of at least an inch occurs an average of 19.5 days a year. The first fall freeze typically occurs by the second week of October, and the last spring freeze occurs by the last week of April.

There is a Main Downtown and Commercial Downtown.

In 2017, Albert Kyaw, a translator of the Garden City Public Schools, stated that Garden City was the most ethnically diverse community in the state of Kansas. That year, according to Frank Morris of National Public Radio, "some say" the residents may speak up to 40 different languages; at least 27 were spoken.

Hispanics and Latinos, including illegal immigrants, came to Garden City beginning in the 1980s due to the establishment of meatpacking plants and partially due to plant management deliberately recruiting them. Many educational institutions for adults were teaching Hispanic immigrants after they had asked for amnesty for having illegally immigrated.

After the Fall of Saigon in 1975 immigrants from southeast Asia began coming to Garden City. Garden City Catholics sponsored an initial group of Vietnamese immigrants that year. More Vietnamese came in the 1980s during a wave of immigration, and Lao people also came with them. Dr. Janet E. Benson of Kansas State University stated that perhaps about half had originated from Wichita since they had lost work during industry layoffs there. The second group of Vietnamese were less educated than the first, and they were more likely to be Buddhist as opposed to being Christian. In their home country they had originally done agricultural and/or fishing work. By the late 1980s many Mexican immigrants replaced Vietnamese immigrants who had moved away from Garden City and stopped doing meatpacking work since they had made sufficient money.

Garden City Arts is a non-profit organization dedicated to enriching lives and encouraging creativity through the arts. Its gallery offers 10 to 12 exhibits per year along with internships and educational programming

In recent years an annual music festival called the Hillside Sessions has taken place at an historic structure which over the decades has been a barn, an industrial atelier and a dance hall. 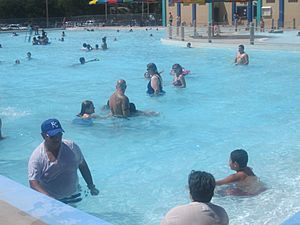 Initially named by its developers "The Big Dipper", Garden City's "The Big Pool" is larger than a 100-yard football field, holds 2.2 million gallons of water and is large enough to accommodate water-skiing. Originally hand-dug in 1922, a bathhouse was added by the Works Progress Administration during the Great Depression, and local farmers used horse-drawn soil-scrapers to later enlarge the pool. The pool hosts 50-meter Olympic swimming lanes, three water slides, and a children's pool with zero-entry depth. The pool employs a minimum of 14 lifeguards, two slide assistants, three admission clerks, two concession workers and a pool manager on duty each day. Advertised for years as "The World's Largest, Free, Outdoor, Municipal, Concrete Swimming Pool", the pool has been known to count up to 2,000 patrons during the summer months. In order to finance improvements made in recent years, an admission fee is now charged.

Located inside 110-acre (0.45 km2) Finnup Park, the pool is co-located with Finney County Historical Museum and Lee Richardson Zoo, the largest zoological facility in western Kansas, housing more than 300 animals representing 110 species. Walking tours are free to the public; there is a charge for driving into the zoo.

A few miles from Finnup Park, the Big Pool and Lee Richardson Zoo is the Buffalo Game Preserve, with one of the largest herds of bison in the world. 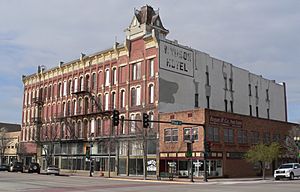 The Windsor Hotel, built downtown in 1887 by John A. Stevens, was known as the "Waldorf of the Prairies" because of its lavish quarters. Among its early guests were Eddie Foy, Lillian Russell, Jay Gould and Buffalo Bill Cody, who stayed in the presidential suite of the third floor. The Windsor, which closed in 1977, is owned by the Finney County Preservation Alliance. The hotel is four stories high, or about 50 ft (15 m). tall. The Finney County Preservation Alliance is working with New Communities LLC of Denver, Colorado to renovate the hotel into a 65-room boutique hotel with restaurant and bar on the ground floor.

Garden City is depicted in Truman Capote's In Cold Blood. Garden City, Kansas is referenced in Billie Jo Spear's 1969 Billboard country hit song "Mr. Walker, It's all over" about a young woman from Garden City who moves to New York City to become a big-city secretary and quickly becomes disenchanted.

Garden City is home to the Garden City Wind baseball team, which plays in the Pecos League.

All content from Kiddle encyclopedia articles (including the article images and facts) can be freely used under Attribution-ShareAlike license, unless stated otherwise. Cite this article:
Garden City, Kansas Facts for Kids. Kiddle Encyclopedia.