Kearny County (county code KE) is a county located in the U.S. state of Kansas. As of the 2010 census, the county population was 3,977. Its county seat and most populous city is Lakin. The county is named in honor of General Philip Kearny.

The original Kearney County was established on March 6, 1873 and was dissolved in 1883, with the land area being split between Hamilton and Finney counties. It was reestablished with its original borders in 1887, and organized on March 27, 1888. The county is named in honor of Philip Kearny, a U.S. Army officer in the Mexican–American War and a Union army general in the American Civil War. In 1889, the name was corrected to Kearny County.

Kearny County observed Mountain Standard Time until the late 1980s, when the United States Department of Commerce moved the county into the Central Time Zone, which 100 of the state's other 104 counties observe. Only four counties (Hamilton, Greeley, Wallace, and Sherman), all of which border Colorado, observe Mountain Time. 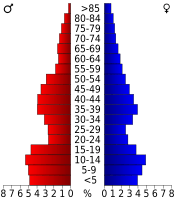 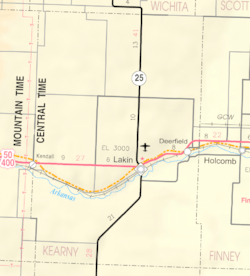 Kearny County is divided into seven townships. None of the cities within the county are considered governmentally independent, and all figures for the townships include those of the cities. In the following table, the population center is the largest city (or cities) included in that township's population total, if it is of a significant size.

All content from Kiddle encyclopedia articles (including the article images and facts) can be freely used under Attribution-ShareAlike license, unless stated otherwise. Cite this article:
Kearny County, Kansas Facts for Kids. Kiddle Encyclopedia.