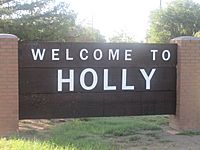 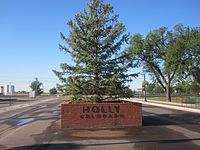 A spruce tree, not a holly tree, in Holly, Colorado 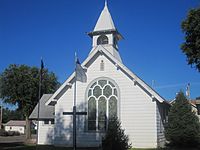 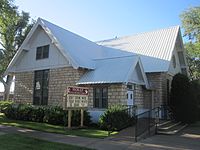 First United Methodist Church in Holly is located across the highway from First Christian Church.

The Town of Holly is a Statutory Town in Prowers County in southeastern Colorado, United States, near the Kansas border. Located four miles (6 km) from the Kansas border at an elevation of 3,392 feet (1,034 m), Holly is the least elevated town in Colorado. The population was 1,048 at the 2000 census.

Holly was settled as a ranching community, and the town was incorporated in 1903. The town was named for Hiram S. Holly, a local cattleman. Hiram S. Holly moved to the town in 1871, and brought 1,300 cattle with him. Holly's ranch was the first settlement in the area.

Holly Sugar was created in the town in 1905 just in time for the sugarbeet harvest that year. The production was so successful the company quickly looked to expand to other communities. By 1911, Holly Sugar had expanded outside the State of Colorado. The company has long since left the Holly community. In 1988, Holly Sugar merged with Imperial Sugar.

A tornado up to 600-feet wide tore through the small southeast Colorado town of Holly late Wednesday evening, killing one woman and injuring 10 others. The twister threw 29-year-old Rosemary Rosales into a tree. She died of massive injuries, Prowers County Coroner Joe Giadone said Thursday. Rosales and 10 others were initially transported to Prowers Medical Center in Lamar. She and six others were then airlifted to high level trauma centers in Denver, Colorado Springs and Pueblo.

According to the United States Census Bureau, the town has a total area of 0.8 square miles (2.1 km2), all land

The Köppen Climate system classifies the weather as semi-arid, abbreviated as BSk.

There were 369 households out of which 39.0% had children under the age of 18 living with them, 54.5% were married couples living together, 8.7% had a female householder with no husband present, and 32.0% were non-families. 27.9% of all households were made up of individuals and 16.3% had someone living alone who was 65 years of age or older. The average household size was 2.71 and the average family size was 3.36.

All content from Kiddle encyclopedia articles (including the article images and facts) can be freely used under Attribution-ShareAlike license, unless stated otherwise. Cite this article:
Holly, Colorado Facts for Kids. Kiddle Encyclopedia.