Labette County (county code LB) is a county located in the U.S. state of Kansas. As of the 2010 census, the county population was 21,607. Its county seat is Oswego, and its most populous city is Parsons. The county was named after LaBette creek, the 2nd largest creek in the county, which runs roughly NNW-SSE from near Parsons to Chetopa. The creek in turn was named after French-Canadian fur trapper Pierre LaBette who had moved to the area, living along the Neosho River, and marrying into the Osage tribe in the 1830s and 1840s.

In the 1840s Labette County had a population mainly consisting of Osage people, although there were also many Cherokee and Euro-Americans. Many of the Euro-Americans were merchants with Osage or Cherokee wives. 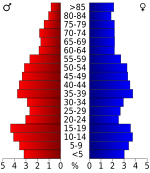 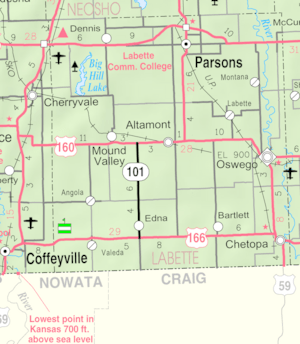 Labette County is divided into sixteen townships. The cities of Chetopa, Oswego, and Parsons are considered governmentally independent and are excluded from the census figures for the townships. In the following table, the population center is the largest city (or cities) included in that township's population total, if it is of a significant size.

All content from Kiddle encyclopedia articles (including the article images and facts) can be freely used under Attribution-ShareAlike license, unless stated otherwise. Cite this article:
Labette County, Kansas Facts for Kids. Kiddle Encyclopedia.