Craig County is a county in the U.S. state of Oklahoma. As of the 2010 census, the population was 15,029. Its county seat is Vinita. The county was organized in 1907, shortly before statehood, and named for Granville Craig, a prominent Cherokee farmer who lived in the Bluejacket area.

In the early 1800s, this area was part of the hunting grounds of the Osage nation and other Plains tribes, some of whom had migrated west from other areas. Members of the Cherokee Nation began moving into the area during the 1830s, particularly after Indian Removal by the US government, which forced them on the "Trail of Tears" to west of the Mississippi River, when they were given land by the United States in exchange for their territory in the Southeast. The area was sparsely populated until after the Civil War. The Texas Road and the East Shawnee Cattle Trail, used for cattle drives from Texas, ran through the eastern part of the present-day Craig County.

Between 1867 and 1870, the U. S. government moved the Shawnee and Delaware tribes into this area from Kansas, another section of Indian Territory. Then the area was assigned as part of the Delaware and Cooweescoowee districts of the Cherokee Nation, Indian Territory, after the US government had made new treaties with the tribes that had allied with the Confederacy during the Civil War.

In 1871, the federal government took Cherokee land for the Missouri, Kansas and Texas Railroad to construct a north-south railroad through this area, while the Atlantic and Pacific Railroad (later acquired by the St. Louis and San Francisco Railway) was allowed to build an east-west line that ran through Vinita in the same year. This line was extended through Tulsa, Oklahoma in 1881-2.

Coal mining began in this area after the Civil War. Mine companies used both tunnel and strip mines, but they did not begin major production until about 1900. Production has continued into the 21st century.

Other resource exploitation was based on oil, and the first oil refinery began operations by 1911; it was operated by Sinclair Oil until the 1920s. Otherwise, farming and ranching were the mainstays of the county economy.

The county was organized in 1907, at the Oklahoma Statehood Convention. It was named for Granville Craig, a prominent Cherokee farmer of mixed race who had property near Bluejacket. 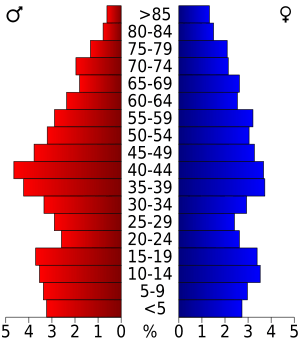 Age pyramid for Craig County, Oklahoma, based on census 2000 data.

The following sites in Craig County are listed on the National Register of Historic Places:

All content from Kiddle encyclopedia articles (including the article images and facts) can be freely used under Attribution-ShareAlike license, unless stated otherwise. Cite this article:
Craig County, Oklahoma Facts for Kids. Kiddle Encyclopedia.