Vinita was established in 1871 by Elias Cornelius Boudinot. In 1889, gunman and lawman Tom Threepersons was born there. It was the first city in the state with electricity. The city was first named "Downingville", and was a primarily Native American community. It was later renamed "Vinita" after Boudinot's friend, sculptor Vinnie Ream. The city was incorporated in Indian Territory in 1898.

The First National Bank opened in 1892, and the local Masonic Lodge was founded in 1894. Newspapers founded before the turn of the 20th Century included Vinita Indian Chieftain (1882), Vinita Leader (1885) and the Daily Indian Chieftain (1899). The Vinita Daily Journal began publication in 1907 and has continued into the 21st Century.

Eastern State Hospital, a state mental health facility, was constructed in 1912 and admitted the first patients in January 1913. It was one of the county's largest employers until its operations were reduced during the 1990s.

A McDonald's bridge-restaurant built over the top of Interstate 44, called the Glasshouse McDonald's, is the world's largest McDonald's restaurant in terms of area, occupying 29,135 square feet (2,706.7 m2). It was formerly known as the Glass House Restaurant. In 2013 and 2014 the "Glasshouse" received a $14.6 million renovation. At its grand reopening on December 22, 2014, it was renamed the "Will Rogers Archway".

Vinita Municipal Airport (FAA Identifier H04) has served the city since 1965. It is about 2 miles (3.2 km) SE of downtown Vinita. The street address is 104 East Illinois Street. The airport manager is Jim Whisenant. This is a municipally-owned facility that primarily handles personal or chartered aircraft, with no scheduled airline service.

Early in its history, cattle ranching in the surrounding countryside contributed heavily to Vinita's economy. When Craig County was created at statehood, Vinita was designated as the county seat. City and county governments became significant employers. In 1935, the Grand River Dam Authority (GRDA) was created. GRDA put its headquarters in Vinita. It is still one of the largest employers in the city, along with two of its many customers: Kansas, Arkansas, Missouri, and Oklahoma Electric Company (KAMO) and Northeast Oklahoma Electric Co-op. Other important employers have included trucking companies, tower-building companies, Munsingwear, General Mills, Cinch, Dana Industries, and Hope Industries. 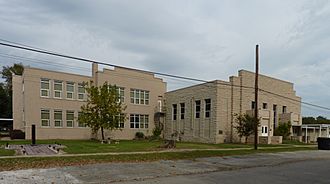 Educational institutions were begun during Vinita's earliest days. Worcester Academy opened in 1883. The Worcester Academy in Vinita should not be confused with the Worcester Academy that was founded in 1843 in Worcester, Massachusetts. The Massachusetts school is still in operation. It was followed by Willie Halsell College in 1888. Halsell College was originally established as Galloway College, named for Methodist Bishop Charles B. Galloway. The school was renamed in 1891 for Willie Halsell, the deceased daughter of a wealthy rancher, W. E. Halsell, who had rescued the school financially. However, the school again failed and closed permanently in 1908. The Roman Catholic Church operated Sacred Heart Academy, a boarding school, from 1897 until 1968.

All content from Kiddle encyclopedia articles (including the article images and facts) can be freely used under Attribution-ShareAlike license, unless stated otherwise. Cite this article:
Vinita, Oklahoma Facts for Kids. Kiddle Encyclopedia.