Kids Encyclopedia Facts
Not to be confused with Delaware, Oklahoma.

Delaware County is a county located in the U.S. state of Oklahoma. As of the 2010 census, the population was 41,487. Its county seat is Jay. The county was named for the Delaware Indians who had established a village in the area prior to the arrival of the Cherokees in Indian Territory in the 1830s.

Archaeological studies have shown that at least three different periods of prehistoric people had lived in the area covered by Delaware County. These included 23 Archaic, 17 Woodland, and 63 Eastern Villager sites. Artifacts date back between 1400 and 2000 years from the present. Many of these sites have been submerged since the creation of Grand Lake o' the Cherokees.

Few Native Americans lived in the area until the early nineteenth century, when the federal government began relocating tribes from the Eastern United States. About 1820, a group of Delaware, who had allied with the Cherokee against the Osage, settled Delaware Town, about two miles south of the present town of Eucha. In 1828, the Western Cherokee moved from Arkansas Territory into the area just south of the present Delaware County. In 1832, the Seneca moved from Ohio into an area that included the northeastern part of Delaware County.

The present day county was created at statehood in 1907. Initially, Grove, the only incorporated town in the county, was designated as the county seat. However, a large number of county residents wanted a more centrally located seat. This group founded the town of Jay, where they built a wooden courthouse and won an election to move the county seat. A court suit resolved the dispute in favor of the Jay location. 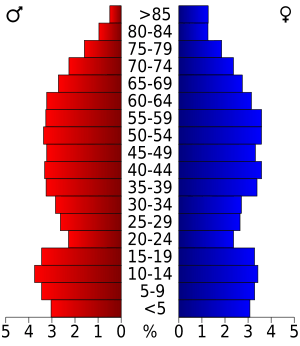 Age pyramid for Delaware County, Oklahoma, based on census 2000 data.

The following sites are in Delaware County are listed on the National Register of Historic Places:

All content from Kiddle encyclopedia articles (including the article images and facts) can be freely used under Attribution-ShareAlike license, unless stated otherwise. Cite this article:
Delaware County, Oklahoma Facts for Kids. Kiddle Encyclopedia.