Colcord is a small farming town in southern Delaware County, Oklahoma, United States. The community lies in the northeastern part of the state in a region known as Green Country. The population was 815 at the 2010 census, a slight decline from 819 at the 2000 census.

Colcord's history starts decades before the establishment of the town itself, with the community of Row, Indian Territory, in the 1890s. As settlers moved to the area, the town of Row grew and businesses formed, including a bank, a school, a hotel, and others. A Post Office was established on May 20, 1905.

In the 1920s, a road (later known as Oklahoma State Highway 116) was built that passed 1 mile (1.6 km) south of the then-healthy town of Row. A rural mail carrier, Charles Burbage, who owned land to the south where the new road was established, platted 64.8 acres (0.262 km2) into blocks, lots and streets. The area grew into a community known as "Little Tulsa" to locals, until residents changed the name in September 1928 to "Colcord," after Charles Francis Colcord. Mr. Colcord was a successful and prominent cattle rancher, oil businessman, and early Oklahoma Territory lawman from Oklahoma City, who owned a large ranch west of the two towns. The ranch employed many local residents, and was very important to the economy and spirit of the area. 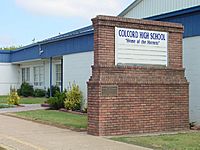 Due to better transportation and a disastrous fire that wiped out many buildings in Row, most businesses moved to Colcord, and the new town was approved to build a high school. A feud between the two towns ensued, and in the first eleven years of Colcord's existence, the school was involved in eleven lawsuits. 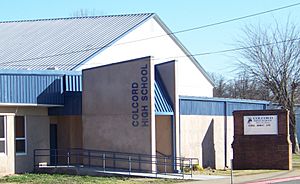 The community's "Old Settlers Day" on the second Saturday of June each year to honor its heritage and the many people that settled in the area and established the town.

New Life Ranch (NLR) is a nearby 1,000-acre (4.0 km2) Christian camp which functions as a summer camp for kids in grades 3-12 and a retreat center throughout the rest of the year. Children and teenagers from all over the United States attend the camp, participating in one-week resident sessions June through August. In 2013 approximately 20,000 people attended camps and retreats hosted at NLR.

Highway 412 West, Colcord, OK 74338 Natural Falls State Park is one of the most beautiful scenic wonders in the state of Oklahoma. Where the Red Fern Grows... The natural setting and scenic beauty of the waterfall is known to millions of movie lovers. The popular 1974 film Where the Red Fern Grows was filmed in part at Natural Falls (then called Dripping Springs). The movie tells the story of a young boy growing up in rural Oklahoma during the hard times of the Great Depression and is considered an American classic.

According to the United States Census Bureau, the town has a total area of 2.44 square miles (6.33 km2), all of it land.

There were 285 households out of which 42.1% had children under the age of 18 living with them, 48.1% were married couples living together, 17.2% had a female householder with no husband present, and 30.5% were non-families. 26.7% of all households were made up of individuals and 13.7% had someone living alone who was 65 years of age or older. The average household size was 2.87 and the average family size was 3.50.

All content from Kiddle encyclopedia articles (including the article images and facts) can be freely used under Attribution-ShareAlike license, unless stated otherwise. Cite this article:
Colcord, Oklahoma Facts for Kids. Kiddle Encyclopedia.