Jay is a city and county seat of Delaware County, Oklahoma, United States. The population was 2,448 at the 2010 census, compared to 2,482 at the 2000 census, a decrease of 1.4 percent. Almost 40% of its residents are Native American, thus Jay is home to numerous Cherokee tribal offices and a health clinic for the Delaware District of the Cherokee Nation. Jay has a council-manager system of government. Becki Farley is the mayor with Kyle Stump serving as Vice Mayor.

The city is celebrated as the Huckleberry Capital of the World and has been host to the annual Huckleberry Festival each July 4 weekend since 1967.

Jay was named for Jay Washburn, a nephew of Stand Watie and grandson of an early-day Cherokee missionary. The town is the county seat of Delaware County, having won that distinction from Grove, Oklahoma in a special county seat election on December 8, 1908. The 1910–11 Legislature made Grove a County Court Town, and provided for two court terms each year. On June 27, 1911, the Supreme Court of Oklahoma ruled in favor of Jay, and on January 5, 1912, the County Commissioners ordered the records to be moved to Jay. On May 10, 1913 the courthouse in Jay was burned, destroying most of the county records. The post office was established May 19, 1909. Jay incorporated in 1939. 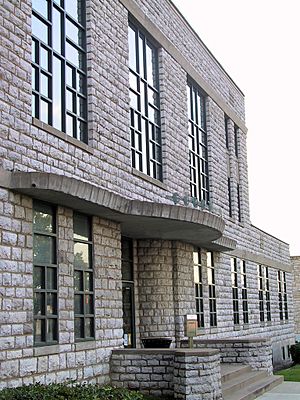 Jay is atypical in Oklahoma history because the townsite and layout were located and platted specifically for its purpose as a county seat. It is not located on a river, major road or railway line as were most Oklahoma towns of the late 1800s and early 1900s. 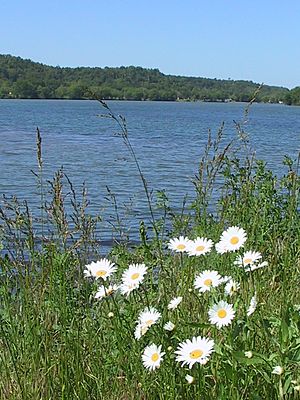 Spavinaw Creek as it spills into Lake Eucha. Five miles south of Jay on Highway 10.

Around 1908, the Delaware County Improvement Association hired a survey team to pinpoint the exact location of the center of the county. They pinpointed allotment land belonging to Thomas Oochaleta, a full-blood Cherokee. Since acquiring title to a full-blood's allotment would require a lengthy federal legal procedure, the committee shifted their attention to the allotment adjoining Oochaleta's on the east, a parcel belonging to committee member Claude L. "Jay" Washbourne. As a mixed-blood Cherokee, Washbourne was exempt from the federal policy restricting the sale or transfer of his land. He gave ten acres on which to construct a town. The town was designed, reserving a central block for a courthouse. The committee quickly constructed a frame building and then applied to the U.S. Postal Service for a post office, submitting the required three town names for consideration. The names submitted were "Center," "Jay," and "Washbourne." Postal authorities chose Jay for its brevity.

There were 955 households, out of which 33.0% had children under the age of 18 living with them, 40.9% were married couples living together, 17.8% had a female householder with no husband present, and 36.1% were non-families. 32.6% of all households were made up of individuals, and 15.3% had someone living alone who was 65 years of age or older. The average household size was 2.48 and the average family size was 3.13.

All content from Kiddle encyclopedia articles (including the article images and facts) can be freely used under Attribution-ShareAlike license, unless stated otherwise. Cite this article:
Jay, Oklahoma Facts for Kids. Kiddle Encyclopedia.