Kids Encyclopedia Facts
Not to be confused with Adair, Oklahoma.

Adair County is a county located in the U.S. state of Oklahoma. As of the 2010 census, the population was 22,286. Its county seat is Stilwell. Adair County was named after the Adair family of the Cherokee tribe. One source says that the county was specifically named for Watt Adair, one of the first Cherokees to settle in the area.

The county was created in 1906 from the Goingsnake and Flint districts of the Cherokee Nation. There was a decade-long struggle over what town would become the county seat between Stilwell and Westville. When the county was formed, Westville was identified as the county seat, due partly to its location at the intersection of two major railroads: the Kansas City Southern Railway and the St. Louis – San Francisco Railway. The county seat was moved to Stilwell in 1910.

During the Great Depression and World War II, strawberries became a major crop in Adair County. In 1948, the first Stilwell Strawberry Festival was organized. The 2002 festival saw some 40,000 people in attendance.

The county is part of the Ozark plateau uplift, the tree-covered foothills of the Boston Mountains. North and central Adair County are drained by the Illinois River and three creeks. Two more creeks lie near Stilwell. 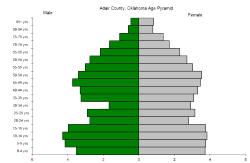 Age pyramid for Adair County, Oklahoma, based on census 2000 data.

There were a total of 8,156 households and 5,982 families in the county in 2010. There were 9,142 housing units. Of the 8,156 households, 31.4 percent included children under the age of 18 and slightly more than half (52.7 percent) included married couples living together. 26.7 percent were non-family, 14.2 percent had a female householder with no husband present, and 26.8 percent contained a single individual of 65 years of age or older. The average household size was 2.77 and the average family size was 3.25. 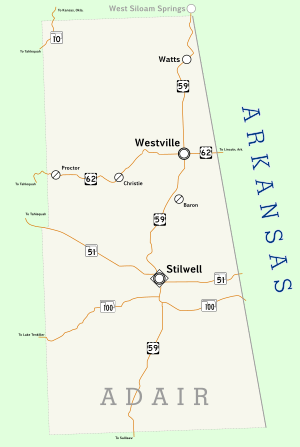 The following sites in Adair County are listed on the National Register of Historic Places:

All content from Kiddle encyclopedia articles (including the article images and facts) can be freely used under Attribution-ShareAlike license, unless stated otherwise. Cite this article:
Adair County, Oklahoma Facts for Kids. Kiddle Encyclopedia.