Kids Encyclopedia Facts
For counties with a similar name, see Washington County (disambiguation).
Not to be confused with Washington, Arkansas.

Washington County is a county located in the northwest part of the U.S. state of Arkansas. As of the 2010 census, the population was 203,065, making it the third-most populous county in Arkansas. The county seat is Fayetteville. It is Arkansas's 17th county, formed on October 17, 1828, and named for George Washington, the first President of the United States. Washington County is part of the Fayetteville-Springdale-Rogers, AR-MO Metropolitan Statistical Area.

The site of the Civil War battle at Prairie Grove is now a state park.

Washington County began as part of the Cherokee Territory, following an 1817 treaty. The area was next known as Lovely County, and one year later Washington County was created after another Cherokee treaty. The court house was centrally located in the city of Washington, modern-day Fayetteville (renamed to avoid confusion with Washington, Arkansas in South Arkansas). The Lee Creek Valley in southern Washington County contained many of the county's early settlements, including Cane Hill and Evansville.

Arkansas College and Cane Hill College were both founded in Washington County within a day of each other in 1834, with the University of Arkansas being founded in Fayetteville in 1871. The county witnessed major battles during the American Civil War, including the Battle of Fayetteville, the Battle of Prairie Grove, and the Battle of Cane Hill. The county then was sparsely settled and many residents were pro-Union, since slaves were few, plantations almost nonexistent, and news came via White River travelers, not from the southern part of the state. A Butterfield Overland Mail route was established through the county in 1858, causing more families to settle there.

The economy of Washington County was based on apples in the late 19th century. A mixture of wet weather, altitude, and loamy soils provided a good environment for apple orchards. First planted in areas around Lincoln, Evansville, and Cane Hill in the 1830s, apple orchards began all across the county. The United States Census reported a crop of 614,924 bushels of apples produced by the county in 1900, the highest in the state. Several varieties of apple were discovered in the area including Shannon Pippin, Wilson June, and most notably the Arkansas Black. The Ben Davis became the apple of choice in the area for sale and shipment across the region. Corn became the dominant crop, outselling apples by almost $500,000 in 1900.

Arkansas Industrial University was founded in the growing community of Fayetteville in 1871 after William McIlroy a donated farmland for the site. The university changed its name in 1899 to the University of Arkansas. Railroads came to Washington County after the St. Louis – San Francisco Railway (Frisco) decided to build a line to Texas through Fort Smith. Two possible routes were proposed, one passing through Prairie Grove, the other through Fayetteville. Many Fayetteville residents and farmers sold or donated land for the right of way to influence the choice. They were successful and in 1881 the first passenger train arrived at Fayetteville. The county continued to grow with more churches and schools after the railroad's completion. Rural parts of the county began losing population in the 1920s during the Great Depression, when high taxes forcing residents to move to Fayetteville or west to Oklahoma. The rural areas later became the Ozark National Forest and Devil's Den State Park. 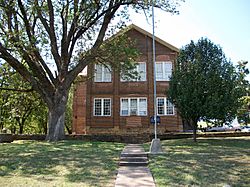 Cane Hill College was founded in Cane Hill one day after Arkansas College in Fayetteville. It was in operation from 1834 to 1891.

According to the U.S. Census Bureau, the county has a total area of 952 square miles (2,470 km2), of which 942 square miles (2,440 km2) is land and 10 square miles (26 km2) (1.1%) is water. It is the fourth-largest county by area in Arkansas. The county is in the Boston Mountains, a subdivision of the Ozark Mountains. Devil's Den State Park in southern Washington County is known for its picturesque views and mountain vistas. Washington County also contains Lake Wedington, located in scenic country west of Fayetteville on Wedington Drive.

Washington County sits on a basement of Precambrian granite and rhyolite, as most of the continental interior of the United States does. Much of the county's geologic history must be inferred from nearby Oklahoma and Missouri research, due to the steepness of the more recently formed mountains that did not form in the neighboring states. This igneous material was eroded until the Paleozoic, when oceans covered the now-low-lying area. These oceans came and retreated for 300 million years, depositing various different sedements during that time. This created fossiliferous limestone and ripple marked-sandstone, both present throughout the north part of the county as evidence of ancient oceans.

Sediments were deposited from the Devonian, Mississippian, and Pennsylvanian periods. During this deposition period, the county had a climate similar to that of the present-day Bahamas, as the equator was north of Washington County. The Devonian brought mostly shales, the Mississippian brought the limestones and chert visible in the bluffs. This chert is present throughout most of the county. The county is also home to the Boone Formation (red soils), white limestones, the Wedington Sandstone, the Bastesville Sandstone, the Pitkin formation (ocean-fossil limestone), and the Fayetteville Shale.

Settlers were attracted to the area by its numerous streams, used to power gristmills, sandstones and clays for use in construction, lime-sweetened soil, and chert for road construction. 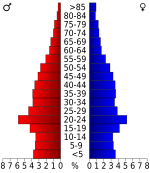 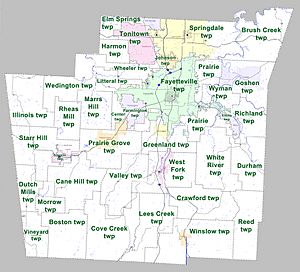 Townships in Washington County, Arkansas as of 2010

Townships in Arkansas are the divisions of a county. Each township includes unincorporated areas and some may have incorporated towns or cities within part of their space. Townships have limited purposes in modern times. However, they are of value for historical purposes in terms of genealogical research. Each town or city is within one or more townships in an Arkansas county based on census maps. The townships of Washington County are listed below. In Washington County, each incorporated town/city is at least partially located within its namesake township.

All content from Kiddle encyclopedia articles (including the article images and facts) can be freely used under Attribution-ShareAlike license, unless stated otherwise. Cite this article:
Washington County, Arkansas Facts for Kids. Kiddle Encyclopedia.