Kids Encyclopedia Facts
Not to be confused with Lincoln County, Arkansas.

Lincoln is a city in Washington County, Arkansas, United States. The population was 2,249 at the 2010 census. It is part of the Northwest Arkansas metro area.

According to the United States Census Bureau, the city has a total area of 1.8 square miles (4.7 km2).

Lincoln is about 25 miles southwest of Fayetteville and about 8 miles east of the Arkansas-Oklahoma border. 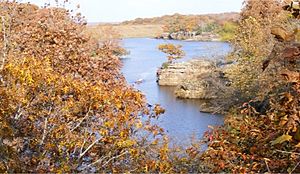 There were 723 households out of which 29.7% had children under the age of 18 living with them, 50.2% were married couples living together, 12.0% had a female householder with no husband present, and 34.7% were non-families. 30.8% of all households were made up of individuals and 17.0% had someone living alone who was 65 years of age or older. The average household size was 2.42 and the average family size was 3.00.

Lincoln is home to the Annual Arkansas Apple Festival, held every year the first weekend of October. For many years, it has attracted visitors to the area who come to see the arts and crafts of the Ozarks. Apple growing was once a major agricultural industry in Lincoln which has recently declined due to changing climate conditions and high costs of upkeep. In spite of the decline, Lincoln still hosts a successful Apple Festival that welcomes visitors and vendors from all over the nation. Serving free apple slices and a swig of Apple Cider to sightseers.

Local Apple farmers developed the following in the Area.

The city of Lincoln was founded in 1907, and recently hosted a centennial celebration in July 2007.

Lincoln is also home to the Arkansas Country Doctor Museum, which includes a collection of medical instruments and personal artifacts from 1930s to 1980's.

The Northwest Arkansas Battle men's full contact football team has called Lincoln home since 2012. The team is part of the Central Football League and plays their season from March through June each year.

Lincoln Public Library was demolished and rebuilt Lincoln Library thanks to a bond, grants, and in-kind services. It is 10,200+ square feet, features 108 computers, tablets, and laptops. The public library has two meetings rooms, a demonstration kitchen, genealogy section and free internet extending into the square. The library hosts multiple services including Ancestory.com, Social Security resource site, GED and Continuation of Education courses. The library has a linguistics center featuring 20 languages.

All content from Kiddle encyclopedia articles (including the article images and facts) can be freely used under Attribution-ShareAlike license, unless stated otherwise. Cite this article:
Lincoln, Arkansas Facts for Kids. Kiddle Encyclopedia.