White County is a county located in the U.S. state of Arkansas. As of the 2010 census, the population was 77,076. The county seat is Searcy. White County is Arkansas's 31st county, formed on October 23, 1835, from portions of Independence, Jackson, and Pulaski counties and named for Hugh Lawson White, a Whig candidate for President of the United States. It is an alcohol prohibition or dry county, though a few private establishments (such as the Searcy Country Club, and Veterans of Foreign Wars posts in Searcy and Beebe) can sell alcohol.

The 45th and current White County Judge is Michael Lincoln of Searcy, who assumed office in January 2007.

On May 17, 1862, White County was the site of the Little Red Skirmish between Union Major General Samule J Curtis and a force of about 100 loosely organized rebels, followed by the Action at Whitney Lane in June., also known as The Skirmish at Searcy Landing.

In 1988, White County elected virtually an entire slate of Republicans to county offices. Though such Republican sweeps had frequently occurred in northern and northwestern Arkansas, White County was the first in the Little Rock area to turn to the GOP, as the party steadily made inroads toward a two-party system.

A portion of White County is represented in the Arkansas State Senate by the Republican Ronald R. Caldwell, a real estate businessman from Wynne in Cross County. 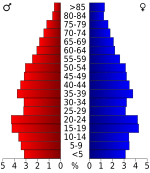 Townships in Arkansas are the divisions of a county. Each township includes unincorporated areas; some may have incorporated cities or towns within part of their boundaries. Arkansas townships have limited purposes in modern times. However, the United States Census does list Arkansas population based on townships (sometimes referred to as "county subdivisions" or "minor civil divisions"). Townships are also of value for historical purposes in terms of genealogical research. Each town or city is within one or more townships in an Arkansas county based on census maps and publications. The townships of White County are listed below; listed in parentheses are the cities, towns, and/or census-designated places that are fully or partially inside the township.

All content from Kiddle encyclopedia articles (including the article images and facts) can be freely used under Attribution-ShareAlike license, unless stated otherwise. Cite this article:
White County, Arkansas Facts for Kids. Kiddle Encyclopedia.