Beebe is a city in White County, Arkansas, United States. The population was 7,315 at the 2010 U.S. Census, making it the second most populous in the county. The city is home to Arkansas State University-Beebe. ASU-Beebe also has branch campuses in Heber Springs and Searcy and at Little Rock Air Force Base.

It was named for Roswell Beebe, a railroad executive responsible for bringing the rail line that runs through the city. Beebe was incorporated in 1875.

According to the United States Census Bureau, the city has a total area of 4.3 square miles (11 km2), all land. 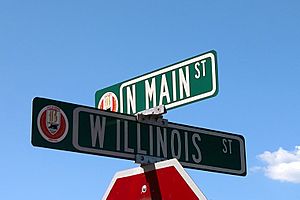 Beebe is served by three main U.S. highways, US 64, US 67, and US 167. US 64 connects Beebe with the growing city of Conway, located 35 miles (56 km) west of Beebe. From Conway, US 64 meets I-40, which provides access to Fort Smith. U.S. 67/167 is a four-lane freeway that connects Beebe with Little Rock to the southwest and with Searcy, Newport, and Walnut Ridge to the northeast. At Exit 28, US 64 joins US 67/167 as it goes northeast to Bald Knob where it branches off of US 67 and goes east to Wynne and eventually West Memphis in eastern Arkansas. Additionally, U.S. Route 67B starts from just east of US 67/US 167 at Exit 28 and goes east into downtown Beebe and then north from downtown Beebe back to US 64/US 67/US 167 as it is a concurrent highway with Arkansas Highway 31 (North Main Street). Beebe is also served by Arkansas Highway 367 (DeWitt Henry Drive), which is a former alignment of US 67 prior to the building of the US 67/US 167 freeway. Just outside the city limits of Beebe, the rural areas are served by Highway 321, Highway 267, and Highway 13. Just like many towns in central and north central Arkansas, Beebe was formed near a railroad and the Union Pacific railroad tracks traverse through the south and east portions of town. The city of Searcy has the nearest airport, as the Searcy Regional Airport is located 15 miles (24 km) northeast of Beebe. Passenger service is available at Clinton National Airport, approximately 35 miles (56 km) southwest of Beebe on the east side of the city of Little Rock.

The city's education corridor is among the most prominent aspects in Beebe, with the city's public schools grouped in an extensive campus situated across the street from Arkansas State University Beebe. Significant additions have been made to the campus since January 1999, when a powerful tornado destroyed nearly complete new school buildings and historic residential areas surrounding the downtown area. The public school district grew in 2004 when schools from nearby McRae were consolidated into the district, which today serves most of southwestern and south-central White County — proceeding westward to El Paso, eastward to Garner, and to other communities in between. Beebe's district also includes the headquarters of a four-county educational service cooperative named for noted former U.S. Representative Wilbur Mills, and located on the city's Main Street.

Public education is supported by the Beebe School District consisting of:

Founded as the Junior Agricultural School of Central Arkansas in 1927, Arkansas State University Beebe's campus has evolved and grown to become a center for long-distance learning and technical trade programs in central Arkansas. The school has been affiliated with the Arkansas State University System since 1955. State Hall, the campus' administration building constructed in 1949, is among both the oldest buildings on the campus and in Beebe's educational community. In the fall of 2005, ASU-Beebe had the second highest enrollment among Arkansas's two-year colleges and universities, trailing only Pulaski Technical College in North Little Rock. ASU-Beebe today is the parent campus to branch campuses in Searcy (at the former Foothills Vocational-Technical Institute) and Heber Springs, and an educational center inside Little Rock Air Force Base in Jacksonville.

Beebe Jail, list on the National Register of Historic Places

All content from Kiddle encyclopedia articles (including the article images and facts) can be freely used under Attribution-ShareAlike license, unless stated otherwise. Cite this article:
Beebe, Arkansas Facts for Kids. Kiddle Encyclopedia.