Kids Encyclopedia Facts
Not to be confused with Conway County, Arkansas.

Conway is a city in the American state of Arkansas and the county seat of Faulkner County, located in the state's most populous Metropolitan Statistical Area, Central Arkansas. Although sometimes considered a suburb of Little Rock, Conway is unique in that the majority of its residents do not commute out of the city to work. The city also serves as a regional shopping, educational, work, healthcare, sports, and cultural hub for Faulkner County and surrounding areas. Conway's growth can be attributed to its jobs in technology and higher education with its largest employers being Acxiom, the University of Central Arkansas, Hewlett Packard, Hendrix College, Insight Enterprises, and many technology start up companies. Conway is home to three post-secondary educational institutions, earning it the nickname "The City of Colleges".

The city of Conway was founded by Asa P. Robinson, who came to the area shortly after the Civil War. Robinson was the chief engineer for the Little Rock-Fort Smith Railroad (now the Union Pacific). Part of his compensation was the deed to a tract of land, one square mile, located near the old settlement of Cadron. When the railroad came through, Robinson deeded a small tract of his land back to the railroad for a depot site. He laid off a town site around the depot and named it "Conway Station", in honor of a famous Arkansas family. Conway Station contained two small stores, two saloons, a depot, some temporary housing and a post office. Despite being founded as a railroad town, there currently exists no passenger service. The disappearance of passenger rail service in the region is attributed to the emphasis placed on the automobile.

In 1878, Father Joseph Strub, a priest in the Roman Catholic Holy Ghost Fathers, arrived in Arkansas. A native of Alsace-Lorraine, Strub was expelled from Prussia during the Kulturkampf in 1872. He moved to the United States, settling in Pittsburgh, where he founded Duquesne University in October 1878. Difficulties with Bishop John Tuigg led Strub to leave Pittsburgh in late October 1878 to travel to Conway. In 1879, Strub convinced the Little Rock and Fort Smith Railroad to deed 200,000 acres (810 km2) along the northern side of the Arkansas River to the Holy Ghost Fathers in order to found the St. Joseph Colony. This included land on which Father Strub founded and built St. Joseph Catholic Church of Conway. As part of the land deal, the railroad offered land at 20 cents per acre to every German immigrant. In order to attract Roman Catholic Germans to Conway and the surrounding areas, Father Strub wrote The Guiding Star for the St. Joseph Colony. In addition to extolling the qualities of Conway and the surrounding area, Father Strub provided information on how best to travel from Europe to Conway. By 1889, over 100 German families had settled in Conway, giving the town many of its distinctively German street and business names.

Conway was long the home of the late Arkansas Supreme Court Associate Justice James D. Johnson (1924– 2010), who ran unsuccessful races for governor in 1956 against then fellow Democrat Orval Eugene Faubus and in 1966 against the Republican Winthrop Rockefeller. Johnson, a leading segregation activist during the confrontation over forced integration at Little Rock Central High School, went on to switch affiliation to the Republican Party in the 1980s, after the death of his nemesis Rockefeller. Johnson also lost an important race in 1968 for the United States Senate against the incumbent James William Fulbright. His wife, the late Virginia Johnson (1928– 2007), ran for governor in 1968, while he was running for U.S. Senate.

The climate in this area is characterized by hot, humid summers and generally mild to cool winters. According to the Köppen Climate Classification system, Conway has a humid subtropical climate, abbreviated "Cfa" on climate maps.

Since 2000, downtown Conway has seen tens of millions of dollars in public and private investment. The revitalization has brought new retail, office, restaurant and residential construction to the historic downtown. 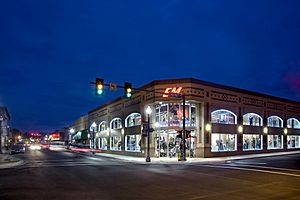 Downtown Conway at the intersection of Oak and Chestnut

There were 23,205 households out of which 33.1% had children under the age of 18 living with them, 43.2% were married couples living together, 12.8% had a female householder with no husband present, and 39.8% were non-families. 27.0% of all households were made up of individuals and 7.0% had someone living alone who was 65 years of age or older. The average household size was 2.45 and the average family size was 3.01.

47.6% of Conway's population describes themselves as religious, slightly below the national average of 48.8%. 44.5% of people in Conway who describe themselves as having a religion are Baptist (21.7% of the city's total population). 9.2% of people holding a religion are Catholic (4.5% of the city's total population). The proportions of Methodists and Pentecostals are higher than the national average.

The Conway Symphony Orchestra performs many times throughout the year, and the Conway Community Arts Association has been presenting theatre and other art opportunities to the community for over 40 years. The Arkansas Shakespeare Theatre, based in Conway, is the state's only professional Shakespeare theater. It holds an annual summer festival in June.

The national award-winning community theatre, The Lantern Theatre, is located downtown and offers a wide variety of plays and musicals year round.

One of the city's largest annual events, Toad Suck Daze, has been held since 1982. The three-day community festival incorporates live music, food and craft vendors, and amusement rides during the first weekend of May. Proceeds from the festival fund college scholarships for local students.

The city held its first ever EcoFest September 12, 2009, in Laurel Park. EcoFest included exhibits and events relating to "green" and sustainable initiatives, including a cardboard car derby and an alleycat bicycle ride. According to organizers led by Debbie Plopper, the event was a success. Mayor Tab Townsell said the event indicated to him that "interest in sustainability is flourishing in this community."

Conway and the surrounding MSA has been recognized nationally for its quality of life and growing economy.

Conway has one official sister city agreement with the city of Quakenbrueck, Germany. In 1986, the first exchange of visitors occurred between the cities. Starting in 1992, Dr. Oudekerk, a professor from Hendrix College, has taken several groups to the sister city in Germany. Since then, the high schools of each city have exchanged students to experience the different cultures. The 25 year anniversary of the relationship was recently celebrated with a festival in Quakenbrueck with the theme of building bridges across the Atlantic.

All content from Kiddle encyclopedia articles (including the article images and facts) can be freely used under Attribution-ShareAlike license, unless stated otherwise. Cite this article:
Conway, Arkansas Facts for Kids. Kiddle Encyclopedia.