Russellville is the county seat and largest city in Pope County, Arkansas, United States, with a 2021 estimated population of 30,971. It is home to Arkansas Tech University. Arkansas Nuclear One, Arkansas' only nuclear power plant is nearby. Russellville borders Lake Dardanelle and the Arkansas River.

It is the principal city of the Russellville Micropolitan Statistical Area, which includes all of Pope and Yell counties.

Before the town was named Russellville, it was known as Chactas Prairie, The Prairie, or Cactus Flats. In the early 19th century, Osage from Missouri hunted frequently in the valley where Russellville is located. Between 1818 and 1828, the area was within a Cherokee reservation, but after 1828 the Cherokee were removed to Indian Territory (present-day Oklahoma), and the land became available for white settlement. The first settler in the area was P.C. Holledger in 1834.

One year later, Dr. Thomas Russell bought Holledger's house. The first business to be established in the town was owned by Mr. Shinn, who later built a masonry structure to replace his wooden store in 1875. This building still exists today, and is known as the Shinn Building. It was built at the intersection of an east-west road from Little Rock to Fort Smith and a north-south buffalo trail to a ford on the Arkansas River. Early travelers used these established trails to pass through the valley. When the town's residents decided to name the town, it came down to two choices: Shinnville or Russellville, and Russellville won.

As with the war with Mexico in the 1840s, many men of Russellville served in the state’s military forces during the American Civil War. Local men served in the state forces early in the war, with many transferring to Confederate regiments by 1862. Several local men were also formed into at least two pro-Union companies. No great battles occurred in or near Russellville, though actions did take place late in the war at nearby Dardanelle (Yell County). While the war came to an official end in 1865, peace did not immediately return to the area. Many areas of Pope County were disrupted in the early 1870s by the bloody and violent events of the Pope County Military War.

The town grew slowly, but during the early 1870s the railroad was built and the town exploded commercially and experienced a boom in population. It connected Russellville to other towns in the area, and ran eventually from Ft. Smith to Little Rock, connecting other river valley towns such as Morrilton, Conway, Atkins, London, and facilitating trade among them. Russellville’s first newspaper, the Herald was founded in 1870. By 1876, the town boasted a population of approximately 800 serviced by fifteen stores, two cotton gins, and six doctors.

Incorporation as a city

On June 7, 1870, Russellville became an incorporated city. Incorporation prompted a debate on moving the county seat, located in Dover since 1841, to one of the growing business centers adjacent to the new tracks. On March 19, 1887, an election was held in which Russellville beat out all competing towns, though Atkins finished a close second on the ballot.

While formal education came to the Russellville area early with the founding of nearby Dwight Mission in 1820, most early schools were either private or by subscription. The Russellville Public School District was formed in 1870, the year the city was incorporated. By 1876, it had evolved into a nine-month school. By 1890, approximately 400 students attended in ten grades, and in 1893, the first class to attend through twelve grades graduated.

Most 19th century residents of the area farmed for a living or, with the coming of the railroad, harvested timber. By the end of the century, Russellville and the surrounding area had become a prosperous coal-mining area, with the Quita Coal Company being the first established. Other coal companies followed with deep mine shafts sunk north and south of town, which, by the 1950s, had given way to strip mining. Cotton became a profitable crop near Russellville; in the early 20th century, bales were sold from wagons in the middle of Main Street. Today, no coal is mined, and the cotton gins are gone. 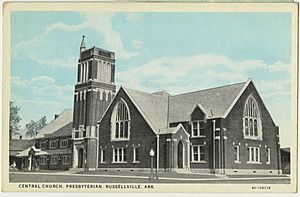 In 1906 the town suffered a massive fire in its central business district. The fire consumed nearly half of the buildings but they were quickly rebuilt, most within six months after the fire. Many were built cheaply, using poor mortar. Today many of these historic buildings are in very bad condition due to the mortar that was used. In 1909 Arkansas Tech University was founded as an agricultural school, Arkansas Polytechnic College, and now has a student population of over 12,000 students between the Russellville and Ozark campuses. As of fall 2014, Arkansas Tech University is the third-largest institution of higher learning in the Natural State, preceded only by University of Arkansas at Fayetteville and Arkansas State University. With America’s entry into World War II, many Russellville men enlisted or were drafted into the military. Many of the local men served in the 153rd Infantry. Battery D and Battery F of the 206th Coast Artillery Regiment of the Arkansas National Guard were initially stationed at ATU. Many of the men saw service in Alaska in what is known as the Williwaw War.

In the years following the war, Russellville’s growth was sparked by the construction of Interstate 40 in 1956. The highway has been a boon to the area’s growth, much like the railroad was in the 1870s. A major economic boost came as a result of the completion of a dam near the Arkansas River crossing between Dardanelle and Russellville in 1965. The dam created a lake, which led to the establishment of Lake Dardanelle State Park, a major tourist attraction in the area. The completion of the lock and power dam, a part of the McClellan-Kerr Arkansas River Navigation System, which brings in between $1 to $2 billion in trade to the state each year, has greatly improved the area’s business prospects. During the 1970s, the town, like so many other small American towns, witnessed the decentralization of its historic downtown area, due to the advent of large retail outlets such as Wal-Mart. Many of the historic buildings were left to decay or were torn down. Also in the 1970s, Arkansas' only nuclear power plant, Arkansas Nuclear One, was built just outside the city, on Lake Dardanelle. The plant brought more people and jobs to the city.

In the NBC series Heroes, Russellville is the location of the plane crash in "Trust and Blood" in season three, episode fifteen. However, research on the area was clearly minimal and the representation of Russellville showed poor understanding of the city's geography and history.

Russellville power plant, Arkansas Nuclear One was featured in a 2011 episode of Aerial America on the Smithsonian Channel.

In 2013, Russellville was chosen as one of the filming locations for the independent Christian film "Cowboys and Jesus". One scene was filmed at Cyclone Stadium, depicting a football game in which locals from the area were invited to attend, appearing as "extras".

Russellville's local newspaper is The Courier, which is published six days a week (every day except Monday).

ABOUT the River Valley magazine, a monthly publication is distributed across five counties (Pope, Yell, Johnson, Conway, and Logan) of the Arkansas River Valley region is based in Russellville.

TV stations that reach Russellville are either from the Little Rock or Fort Smith markets as Russellville is on the "fringe" of both service areas. Russellville receives KFSM-TV (CBS) and KFTA-TV (FOX) from Fort Smith and KARK-TV (NBC) and KATV-TV (ABC) from Little Rock. The farther away from the city center one is, the likelihood becomes greater that one will receive the full package of channels from one market over the other (Fort Smith to the west and Little Rock to the east of town).

Russellville is known for its local music, art scene, and historic downtown area. The most notable of these events is the Art Walk. On the first Friday night of each quarter (March, June, September, and December), the city hosts the Downtown Art Walk, in which the public may listen to live music, taste wine and food, and appreciate, purchase and sell art while connecting with the community, as well as have their picture taken in the Alley.

Russellville hosts a variety of sporting events and fishing tournaments, due to its location on Lake Dardanelle. Russellville is also close to Mt. Nebo and other state parks such as Lake Dardanelle State Park. Also many people commute to Russellville on a daily basis from its surrounding areas, for both work and recreation.

Russellville is also home to the Pope County Fairgrounds, which hosts many events ranging from horse racing to fairs and conventions. At the end of every summer, Russellville is also host to the annual Pope county fair; featuring rides, live music, livestock, games, and other various forms of entertainment. The county fair attracts more than 50,000 visitors each year.

In 2013, Russellville was chosen as one of the filming locations for the independent Christian film "Cowboys and Jesus". One scene was filmed at Cyclone Stadium, depicting a football game in which locals from the area were invited to attend, appearing as "extras".==In popular culture== In the NBC series Heroes, Russellville is the location of the plane crash in "Trust and Blood" in season three, episode fifteen.

Russellville power plant, Arkansas Nuclear One was featured in a 2011 episode of Aerial America on the Smithsonian Channel.

All content from Kiddle encyclopedia articles (including the article images and facts) can be freely used under Attribution-ShareAlike license, unless stated otherwise. Cite this article:
Russellville, Arkansas Facts for Kids. Kiddle Encyclopedia.