Pope County is a county located in the U.S. state of Arkansas. As of the 2010 census, the population was 61,754. The county seat is Russellville. The county was formed on November 2, 1829, from a portion of Crawford County and named for John Pope, the third governor of the Arkansas Territory. It is an alcohol prohibition or dry county.

A large Democratic majority was ardently split into a "town or country" dichotomy at the local level. Further, the county was split between Union and Confederate sympathizers, with deep grudges being held by both sides for grievances committed during the opposite's rule during the war. After the war, Republicans controlled local government and the Democrats controlled the county economy. The political situation and cultural differences kept tensions high between the groups, occasionally resulting in violence. The most violent episode came to be known as the Pope County Militia War, a six-month drama involving robbery, plundering and murder. The state-controlled militia eventually arrived to enforce martial law in the county, making the local Democrats who were providing armed resistance to Clayton's Republican army heroes to Confederate sympathizers around the state. 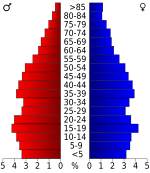 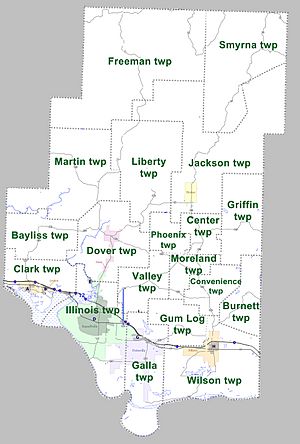 Townships in Pope County, Arkansas as of 2010

Townships in Arkansas are the divisions of a county. Each township includes unincorporated areas; some may have incorporated cities or towns within part of their boundaries. Arkansas townships have limited purposes in modern times. However, the United States Census does list Arkansas population based on townships (sometimes referred to as "county subdivisions" or "minor civil divisions"). Townships are also of value for historical purposes in terms of genealogical research. Each town or city is within one or more townships in an Arkansas county based on census maps and publications. The townships of Pope County are listed below; listed in parentheses are the cities, towns, and/or census-designated places that are fully or partially inside the township.

All content from Kiddle encyclopedia articles (including the article images and facts) can be freely used under Attribution-ShareAlike license, unless stated otherwise. Cite this article:
Pope County, Arkansas Facts for Kids. Kiddle Encyclopedia.