Newton County is a county located in the U.S. state of Arkansas. As of the 2010 census, the population was 8,330. The county seat is Jasper. Newton County is Arkansas's 46th county, formed on December 14, 1842, and named for Thomas W. Newton, an Arkansas Congressman. It is an alcohol prohibition or dry county. 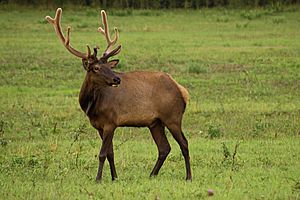 Newton County lies almost entirely within the rugged Boston Mountain range of the Ozark Mountains where elevations exceed 2,500 feet (760 m). The Buffalo National River, a popular destination for canoeing and recreation, runs through the county from west to east. Highway 7, which traverses the county from north to south, has been rated as one of the most scenic drives in the region. 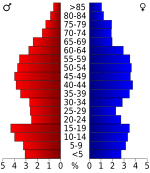 Native residents of Newton County were interviewed in 1970 for research being done by a doctoral student at the University of Arkansas in Fayetteville. A Ph.D. degree was awarded to Bethany K. Dumas in May 1971 after she completed "A Study of the Dialect of Newton County, Arkansas." Results are discussed in two of her published articles/chapters: “The Morphology of Newton County, Arkansas: An Exercise in Studying Ozark Dialect,” Mid–South Folklore 3 (1975), 115–125, and “Southern Mountain English” Chapter 5 of The Workings of Language, ed. R. S. Wheeler, Westport, CT, and London: Praeger, 1999, 67-79.

24 Hours of Horseshoe Hell (24HHH) is an annual rock-climbing competition held at Horseshoe Canyon Ranch in Newton County. Using difficulty ratings based on the Yosemite Decimal System, teams of two attempt to climb as many routes as possible in 24 hours. The sandstone walls of the canyon has over 411 established routes. The event was first held in 2006, and was rated by Climbing magazine as one of the most difficult endurance events in the nation. 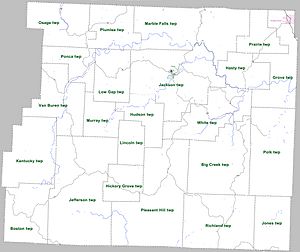 Townships in Newton County, Arkansas as of 2010

Townships in Arkansas are the divisions of a county. Each township includes unincorporated areas; some may have incorporated cities or towns within part of their boundaries. Arkansas townships have limited purposes in modern times. However, the United States Census does list Arkansas population based on townships (sometimes referred to as "county subdivisions" or "minor civil divisions"). Townships are also of value for historical purposes in terms of genealogical research. Each town or city is within one or more townships in an Arkansas county based on census maps and publications. The townships of Newton County are listed below; listed in parentheses are the cities, towns, and/or census-designated places that are fully or partially inside the township.

All content from Kiddle encyclopedia articles (including the article images and facts) can be freely used under Attribution-ShareAlike license, unless stated otherwise. Cite this article:
Newton County, Arkansas Facts for Kids. Kiddle Encyclopedia.