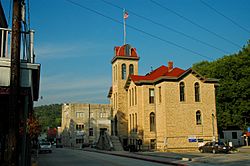 Carroll County is a county located in the U.S. state of Arkansas. As of the 2010 census, the population was 27,446. The county has two county seats, Berryville and Eureka Springs. Carroll County is Arkansas's 26th county, formed on November 1, 1833, and named after Charles Carroll of Carrollton, the last surviving signer of the United States Declaration of Independence. 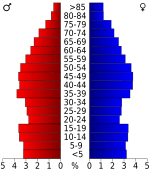 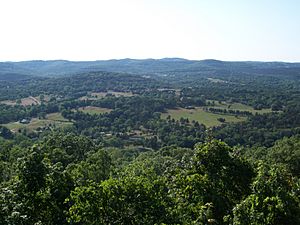 View from a scenic outlook on US 62 west of Eureka Springs. 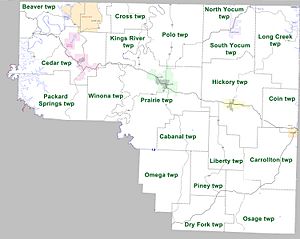 Townships in Carroll County, Arkansas as of 2010

Townships in Arkansas are the divisions of a county. Each township includes unincorporated areas; some may have incorporated cities or towns within part of their boundaries. Arkansas townships have limited purposes in modern times. However, the United States Census does list Arkansas population based on townships (sometimes referred to as "county subdivisions" or "minor civil divisions"). Townships are also of value for historical purposes in terms of genealogical research. Each town or city is within one or more townships in an Arkansas county based on census maps and publications. The townships of Carroll County are listed below; listed in parentheses are the cities, towns, and/or census-designated places that are fully or partially inside the township.

All content from Kiddle encyclopedia articles (including the article images and facts) can be freely used under Attribution-ShareAlike license, unless stated otherwise. Cite this article:
Carroll County, Arkansas Facts for Kids. Kiddle Encyclopedia.