Beaver is a town in Carroll County, Arkansas, United States. As of the 2010 census it had a population of 100. The community is located on the White River at the western limits of Table Rock Lake deep in the Ozark Mountains. Located north of Eureka Springs, the small town has been featured in movies for its picturesque scenery. The town is known for the Beaver Bridge, a two-panel suspension bridge over the White River listed on the National Register of Historic Places. 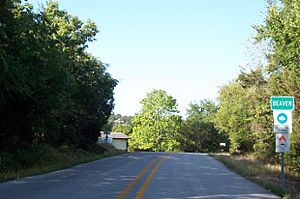 West entrance on Highway 187 to Beaver

Highway 187 is the only member of the Arkansas Highway System that serves Beaver. The route leads west 5 miles (8 km) to US Highway 62, which provides access to Eureka Springs to the southeast and Rogers to the west. The Arkansas Highway 23, the Pig Trail Scenic Byway, runs near the town as well, a popular route with tourists and motorcyclists.

There were 37 households, of which 29.7% had children under the age of 18 living with them, 62.2% were married couples living together, 5.4% had a female householder with no husband present, and 27.0% were non-families. 21.6% of all households were made up of individuals and 8.1% had someone living alone who was 65 years of age or older. The average household size was 2.57 and the average family size was 2.81. 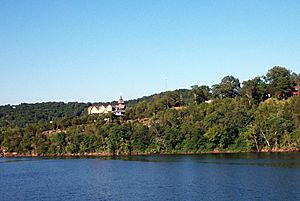 Castle Rogue's Manor on the shores of Table Rock Lake

Beaver contains the Beaver Store Inn, a bed and breakfast and general store, located next to the waterfront town-operated Beaver RV and Camping Park.

Several miles to the south from the town of Beaver was Dinosaur World, a theme park covering 65 acres (26 ha), which had 100 life-size sculptures of dinosaurs and cavemen. It also featured a 40-foot-tall (12 m) statue of King Kong known as the "World's Largest King Kong". The park has been closed since 2005 and is not open to the public

The Beaver Bridge was depicted in the 2005 film Elizabethtown, and a nearby train trestle was featured in The Blue and the Gray.

All content from Kiddle encyclopedia articles (including the article images and facts) can be freely used under Attribution-ShareAlike license, unless stated otherwise. Cite this article:
Beaver, Arkansas Facts for Kids. Kiddle Encyclopedia.