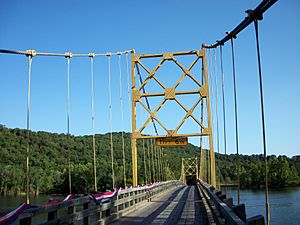 Close up on north tower

The bridge was bid on December 19, 1947 to Pioneer Construction Company of Malvern, Arkansas. The construction foreman who led the project was M.R. Blair (1914-2014), who later served as lead foreman on numerous bridge and highway projects across Arkansas, Missouri and Tennessee, and who led the construction of numerous dams, highways and bridges throughout the southwestern United States, including the 1964 Big I interchange of Interstates 25 and 40 in Albuquerque, New Mexico. Remarkably, Blair and his team completed the project without the benefit of an industrial crane, using only a pickup-mounted, knuckle-boom type crane.

Since the construction was coincident with the building of Table Rock Dam, completion was delayed until 1949 as the United States Army Corps of Engineers required the bridge to be raised 40 feet (12 m). Upon completion, the bridge remained a vital link for the citizens of Beaver until its closure for major deck rehabilitation in 1981. Further rehabilitation occurred in 2003. The bridge has a 10-ton weight limit. The bridge was temporarily closed for inspection in October 2018 after two overweight buses crossed it.

All content from Kiddle encyclopedia articles (including the article images and facts) can be freely used under Attribution-ShareAlike license, unless stated otherwise. Cite this article:
Beaver Bridge (Arkansas) Facts for Kids. Kiddle Encyclopedia.