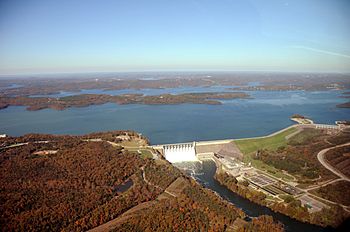 Table Rock Lake is an artificial lake, or reservoir, in The Ozarks of southwestern Missouri and northwestern Arkansas. The lake was made by the construction of Table Rock dam. This 252 foot high impoundment was constructed in 1954-1958 on the White River by the United States Army Corps of Engineers. It is one of the popular attractions for the nearby town of Branson, Missouri. There are several commercial marinas along the lake, and Table Rock State Park is located on the east side. Downstream from the dam, the Missouri Department of Conservation operates the Shepherd of the Hills Fish Hatchery, which is used to stock trout in Lake Taneycomo. The cold water from the dam creates an ideal environment for Rainbow trout and Brown trout.

The lake area temperature varies according to season: 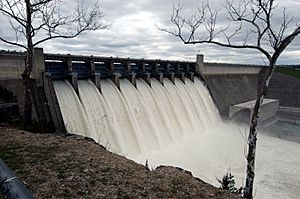 The original purpose of the reservoir was for flood control on the White River. It also produces Hydroelectric power and provides recreation for southern Missoui and northern Arkansas. The dam had been authorized under the Flood Control Act of 1941. But World War II and the Korean War delayed construction until 1954. The reservoir has a fluctuation of 16 feet (4.9 m). When the reservoir is above the maximum flood pool, excess water goes over the auxiliary overflow spillway at the north end of the dam. Table Rock is the second of four major reservoirs on the White River before it enters the Mississippi River. The other three are Beaver Lake, Lake Taneycomo and Bull Shoals Lake.

Table Rock is one of the premier Largemouth bass fishing lakes in the United States. All three species of Black bass are here in abundance (Largemouth, Smallmouth and Spotted). The lake has produced Largemouth bass of over 10 pounds and Smallmouth bass over 7 pounds. Table Rock is the site of several major Bass fishing tournaments each year. The lake has several other species of game fish including Crappie, Walleye, White Bass, Paddlefish Catfish and Sunfish. Lake Tannycomo, below Table Rock dam, is one of the top 5 Rainbow and Brown trout fisheries in the world.

All content from Kiddle encyclopedia articles (including the article images and facts) can be freely used under Attribution-ShareAlike license, unless stated otherwise. Cite this article:
Table Rock Lake Facts for Kids. Kiddle Encyclopedia.