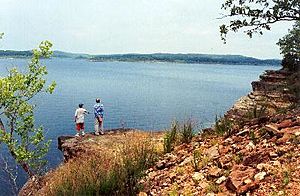 Bull Shoals Lake is an artificial lake or reservoir. It is in the Ozark Mountains of northern Arkansas and southern Missouri. Bull Shoals has hundreds of miles of lake arms and coves. This makes it good for boating, water sports, swimming, and fishing. Nineteen developed parks around the shoreline. These provide campgrounds, boat launches, swim areas, and marinas. 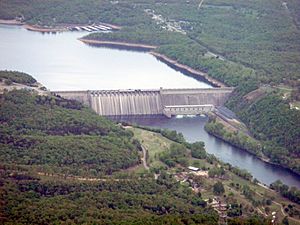 Bull Shoals Dam was created to impound (hold water in a reservoir) the White River. Bull Shoals has one of the largest concrete dams in the United States. It was the 5th largest dam in the world when the project was started. Work on the dam began in 1947 and was completed in 1951. In 1952 it was dedicated by President Harry S. Truman At least seven small family cemeteries and 20 larger cemeteries were carefully moved to make room for the new lake.

Bull Shoals Lake is the last reservoir on the White River before it enters the Mississippi River. The other three are Beaver Lake, Table Rock Lake and Lake Taneycomo. Bull Shoals lake is controlled by the Army Corps of Engineers and has the primary purpose of flood control. The level of the lake changes regularly. The normal pool level elevation is 654 feet above sea level, which is locally known as 'powerpool'. However, the elevation changes between 630 and 680 feet.

The upper part of the lake, below nearby Powersite Dam, is known as the "Pothole". The dam is designed for a maximum elevation of 695 feet (top of the flood pool). Bull Shoals Lake covers 45,000 acres (182 km²) with a 700-mile (1,120-km) shoreline at powerpool. It expands to more than 70,000 acres (284 km²)with a 1,000-mile (1,600-km) shoreline at 690 feet. The bottom of the lake consists of bedrock with very little vegetation. The shoreline of the lake is protected by a buffer zone (locally called the 'take line'). This area is owned, managed, and controlled by the Army Corps of Engineers. There is very little development around Bull Shoals. Most of the shoreline is heavily forested. 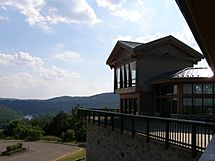 The Bull Shoals-White River State Park is a 725-acre (2.9 km²) park in Baxter and Marion Counties of Arkansas. It lies both above and below the large dam. Facilities, including camping, pavilions, docks and a nature center, stretch along the banks of the White River. The park offers 103 riverside campsites and 20 tent sites. Two rent-a-camp and two rent-a-RV sites are also available. Picnic areas and pavilions are scattered throughout the park. There are trails through the surrounding woods. A marina contains boating equipment and also rents boats. The visitors' center offers programs, workshops, camps, boating and fishing exhibits and an aquarium. Tours of the power generation plant and other dam facilities are available for a fee.

Table Rock is one of the premier Largemouth bass fishing lakes in the United States. The best time for bass fishing is between March and May. This is when the bass spawn in the shallows. Bull Shoals Lake is Arkansas's largest lake, and is also well known as a trout hot spot. Rainbow trout and brown trout of record size have been caught in the lake, with bream, catfish, crappie and largemouth bass also plentiful. Swimming and other watersports are also welcome at the lake. Arkansas Highway 178 runs along the top of Bull Shoals Dam and into the park.

Record rainfall in the spring of 2008 caused Bull Shoals to reach its highest water level since 1957. The lake crested at 695.02 feet above sea level. The Army Corps of Engineers opened the floodgates to stop the lake from more flooding.

All content from Kiddle encyclopedia articles (including the article images and facts) can be freely used under Attribution-ShareAlike license, unless stated otherwise. Cite this article:
Bull Shoals Lake Facts for Kids. Kiddle Encyclopedia.