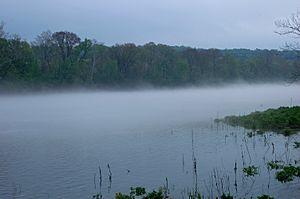 Lake Taneycomo is a man-made lake or reservoir on the White River in the Ozark Mountains of Taney County, Missouri. The reservoir is named for the county in which it is located: Taney County, MO. It flows through the city of Branson, Missouri. Tanycomo is the third of four reservoirs on the White River before it enters the Mississippi River. The other three are Beaver Lake, Table Rock Lake and Bull Shoals Lake.

Lake Taneycomo widened out to be a lake with the completion of the Powersite Dam, near Forsyth, Missouri, in 1913. From 1913 until 1958 it was a warm water lake. The United States Army Corps of Engineers completed the Table Rock Dam in 1958. This changed Tanycomo from a warm water lake to a very cold 58 degrees Farenheit (maximum). Gone were the Smallmouth bass the White River was famous for. But it turned Lake Tanycomo into a world class trout fishery.

In 1957, the Missouri Department of Conservation constructed the Shepherd of the Hills Fish Hatchery. It provides between 350,000 and 400,000 pounds of rainbow and brown trout per year, most of which goes into Lake Tanycomo. In 2001, while doing a survey of the lake, Missouri Department of Conservation biologists captured a 36.5 inch long trout they estimated weighed 37 pounds. The trout was promptly released. In 2009, Scott Sandusky, caught the Missouri state record Brown Trout which was 37 inches long and 24.75 inches in girth. It weighed 28.8 pounds and was taken on a spinning rod with 4 pound test line.

Lake Taneycomo is both a river and a lake. The shallow colder water, located near the Table Rock Dam, averages 48 degrees F. Here it resembles a river and allows fishing from the banks of the river. Moving downsteam the temperature of the water gets warmer and the lake deepens to more than 50 feet (15 m) near the Powersite Dam in Forsyth. The current can be very strong when Table Rock dam is generating power. The water temperature also drops. At this time the fishing tends to be very good. All methods of trout fishing — fly fishing, fishing lures, and live bait fishing — may be used year-round to catch trout that inhabit the waters of Lake Taneycomo.

All content from Kiddle encyclopedia articles (including the article images and facts) can be freely used under Attribution-ShareAlike license, unless stated otherwise. Cite this article:
Lake Taneycomo Facts for Kids. Kiddle Encyclopedia.