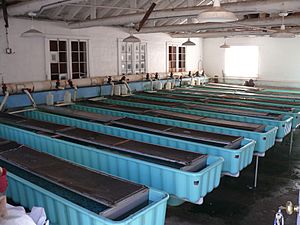 A fish hatchery is where fish are hatched and cared for, usually to be released in natural waters (rivers, lakes, etc.). They may also be transferred to Fish farms and raised for food. Fish hatcheries and farms (also called aquaculture) are either commercial or run by a state, province, or country. Some species that are commonly raised in hatcheries include Pacific oysters, shrimp, prawns, salmon, tilapia and scallops. In the United States in particular, many species of game fish are raised in hatcheries. These include black bass, trout, walleye, Northern pike, and Muskellunge.

All content from Kiddle encyclopedia articles (including the article images and facts) can be freely used under Attribution-ShareAlike license, unless stated otherwise. Cite this article:
Fish hatchery Facts for Kids. Kiddle Encyclopedia.