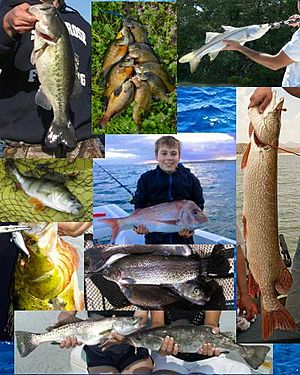 A few popular game fish around the world.

Game fish are fish that are popular to catch for sport by fishermen (anglers). They can be freshwater fish or saltwater fish. Game fish can be eaten after being caught, though increasingly anglers practice catch and release to improve fish populations. Some game fish are also caught commercially, for example salmon.

All content from Kiddle encyclopedia articles (including the article images and facts) can be freely used under Attribution-ShareAlike license, unless stated otherwise. Cite this article:
Game fish Facts for Kids. Kiddle Encyclopedia.