Boone County was formed from the eastern portion of Carroll County. Contrary to popular belief, it was not named for frontiersman Daniel Boone. It was originally called Boon, since the residents believed it would be a "boon" to all who settled there. The "e" was added to the name later.

The county lies entirely within the Ozark Mountains. Rolling hills characterize the topography, with the more rugged Boston Mountains lying just to the south. Isolated peaks of the Boston Mountain range are found in the south, including Boat Mountain, Pilot's Knob, and Gaither Mountain. Portions of Bull Shoals Lake and Table Rock Lake lie in the northeast and northwest corners, respectively. The Corps of Engineers operates and maintains popular campsites on the lakes at Lead Hill and Cricket Creek. Crooked Creek, popular with bass fishermen, winds through the county from south to east. 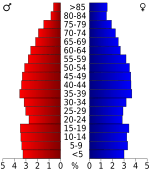 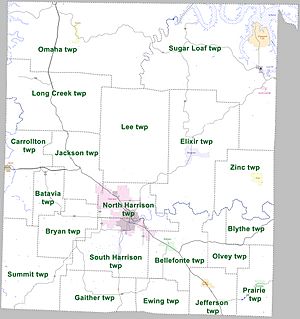 Townships in Boone County, Arkansas as of 2010

Townships in Arkansas are the divisions of a county. Each township includes unincorporated areas; some may have incorporated cities or towns within part of their boundaries. Arkansas townships have limited purposes in modern times. However, the United States Census does list Arkansas population based on townships (sometimes referred to as "county subdivisions" or "minor civil divisions"). Townships are also of value for historical purposes in terms of genealogical research. Each town or city is within one or more townships in an Arkansas county based on census maps and publications. The townships of Boone County are listed below; listed in parentheses are the cities, towns, and/or census-designated places that are fully or partially inside the township.

All content from Kiddle encyclopedia articles (including the article images and facts) can be freely used under Attribution-ShareAlike license, unless stated otherwise. Cite this article:
Boone County, Arkansas Facts for Kids. Kiddle Encyclopedia.