Kids Encyclopedia Facts
This page is about the section of U.S. Route 64 in Arkansas. For the entire route, see U.S. Route 64.

U.S. Route 64 is a U.S. highway running from Teec Nos Pos, Arizona east to Nags Head, North Carolina. In the U.S. state of Arkansas, the route runs 246.35 miles (396.46 km) from the Oklahoma border in Fort Smith east to the Tennessee border in Memphis. The route passes through several cities and towns, including Fort Smith, Clarksville, Russellville, Conway, Searcy, and West Memphis. US 64 runs parallel to Interstate 40 until Conway, when I-40 takes a more southerly route. 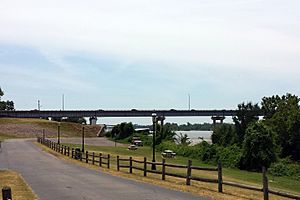 Bridge carrying US 64 over the Arkansas River in Van Buren 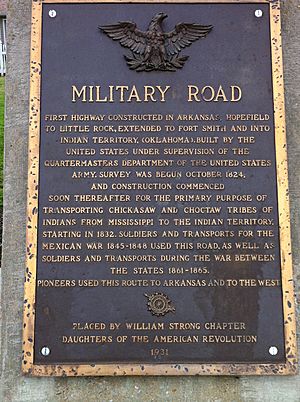 US 64 crosses Arkansas' western border over the Arkansas River, heading southeast into downtown Ft. Smith. Upon entry to Arkansas, the highway passes the Fort Smith National Historic Site, Ft. Smith Confederate Monument, Commercial Hotel and the West Garrison Avenue Historic District, all on the National Register of Historic Places. The highway turns northwest near the New Theatre, following the Arkansas and Missouri Railroad and concurring with US 71 Business onto 10th and 11th Streets. Westbound traffic runs on 10th St and eastbound traffic on 11th St past the Fort Smith Masonic Temple. Traffic converges onto Midland Boulevard. US 64 crosses the Arkansas River again near the American Doughboy Monument as it enters Van Buren on Broadway. US 64 passes the Van Buren Post Office before turning east onto Main Street, then northeast again becoming the Alma Highway. US 64 passes a former alignment, now designated as Oak St. After Oak St, US 64 crosses I-540 and continues east to Alma. US 64 closely follows Interstate 40 until Conway, while also closely following the Arkansas River, the Union Pacific Railroad, and the southern edge of the Ozark National Forest.

US 64 continues through mountainous Franklin County, intersecting the Pig Trail Scenic Byway in Ozark. The route passes the Franklin County Courthouse, and the Ozark Courthouse Square Historic District in Ozark before exiting town continuing east. Route 64 passes a historically significant connector road in Wiederkehr Village before entering Altus and entering Johnson County. US 64 runs through Coal Hill and Hartman before curving northeast and crossing over I-40. The route continues to Clarksville, home of the University of the Ozarks. The route passes the Johnson County Courthouse, historic American Legion Hut, Clarksville Municipal Airport, and Lake Dardanelle before again crossing over I-40 and entering Pope County.

US 64 then parallels Interstate 40, through Russellville and Morrilton. In Faulkner County, it briefly converges with U.S. Route 65B through Conway heading south before diverging from US 65 Business and Interstate 40 by turning east onto Oak Street. The highway next approaches Vilonia, following a southerly bypass around the city that opened in October 2011 (replacing its former alignment along Vilonia's Main Street) and rejoining its prior alignment west of the White County line and continuing to El Paso, where it intersects Arkansas Highway 5. US 64 then travels east to Beebe, where it originally entered town via Center Street and joined with US 67 and US 167. This former route along Center Street has since been resigned U.S. Route 67B, as all three US highways have been relocated to a concurrent divided highway northwest of Beebe.

US 64 runs along this divided highway past McRae, Garner, and Searcy, where its original route took it north along Main Street, then east along Race Avenue. This former route is now signed U.S Route 67B. Later, US 64, 67, and 167 were rerouted southeast of Searcy along Eastline Road, which is now signed Arkansas Highway 367. Currently, all three highways continue to run northeast along a divided highway running parallel to Eastline Road.

US 64 diverges from US 67 & 167 on the northeast side of Bald Knob, where its former route took it downtown along Highway Avenue, which is now signed Arkansas Highway 367. US 64 turns east toward the White River and Woodruff County, while the divided US 67 diverges northeast, and US 167 diverges north. 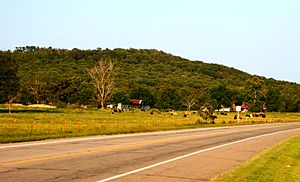 US 64 continues east through Augusta and McCrory, intersecting with US Route 49 at Fair Oaks and bypassing Wynne while in Cross County, and proceeding into Crittenden County through Earle and Crawfordsville, until joining with Interstate 55 at Marion. Its former route continued east along Military Road, turning south onto the Great River Road, and converging with US Route 63, which has since also been rerouted along Interstate 55. The former route is signed Arkansas Highway 77. 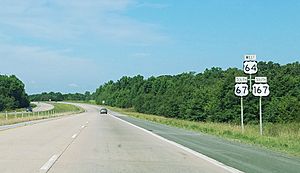 US 64 continues south to West Memphis, where its former route entered the city from the north via Missouri Street, turning east (diverging from US 63 while converging with US 70 & 79) onto Broadway. Its current route turns east north of West Memphis as Interstates 55 and 40 briefly converge, before entering Tennessee (and downtown Memphis) along the Interstate 55 bridge.

Each August, a large yard sale similar to the Highway 127 Corridor Sale takes place along 160 mi (260 km) of US 64 in Arkansas, in locations stretching from Fort Smith to Beebe.

The Arkansas River Valley has served as an east-west pathway across Arkansas for centuries, with travelers taking advantage of the flat natural topography between the Ozark Mountains and the Ouachita Mountains. When the United States Army began constructing the Memphis to Little Rock Road on January 31, 1824, it followed a historic trail through the region. 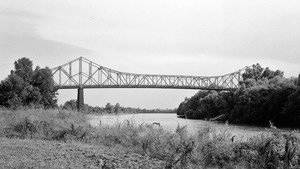 The original segment listings are contained within the Arkansas Highway History and Architecture Multiple Property Submission, which preserves history from Arkansas's highway building era between 1910 and 1965. The Horsehead Creek Bridge was listed within the Historic Bridges of Arkansas MPS. Two other bridges were NRHP-listed until their demolition: the 1920 Galla Creek Bridge near Pottsville was removed in 2000, and the 1930 Augusta Bridge over the White River was removed in 2002.

The Old US 64-Van Buren Segment is a stretch of historic roadway in Van Buren. Now designated Oak Lane, this stretch of concrete road was built in 1928 by Shultz Construction Co. as part of the original alignment of US 64, whose current alignment (built in 1968) travels to the south. This stretch of road is about 0.65 miles (1.05 km) long and 18 feet (5.5 m) wide, carrying two lanes of traffic with no shoulder. It is made out of a tan-colored aggregate mixed with concrete. This segment was part of the first concrete-paved road in Crawford County.

The Johnson County Line-Ozark-Crawford County Line Road, Altus Segment is a historic roadbed in Altus. It consists of a 425-foot (130 m) section of stone-paved roadbed, located on the north side of US 64 between Robin Way and County Road 515. The roadbed is about 10 feet (3.0 m) wide, with gravel shoulders, and has a small concrete bridge spanning a ditch. Built sometime between c. 1918 and 1931, it is the only known example of stone pavement in rural Arkansas. US 64 was redirected onto a new terrain roadway in 1931, leaving this segment as a nameless connector road.

The US 64 Horsehead Creek Bridge is a historic bridge, carrying US 64 across Horsehead Creek east of Hartman. Its two main spans are Parker pony trusses, 102 feet (31 m) in length, with steel deck girder approach spans giving the bridge a total length of 415 feet (126 m). The trusses are mounted on concrete piers, with the approaches on concrete piers and abutments. The bridge was built in 1933–1934 by Fred Luttjohann, and served as a major crossing point and transportation route until the construction of Interstate 40 (I-40) to the north.

The Old US 64, Scotia Segment is a section of historic roadway in the unincorporated community of Scotia. It extends eastward from Country Lane, south of the current alignment of US 64. It is about 0.5 miles (0.80 km) in length, following an arced route, and is covered in a bituminous that has in places deteriorated into gravel. It is believed to be the longest-surviving element of the c. 1920 alignment of US 64 in Arkansas, and was built on an alignment dating to the 1830s. It is believed this road formed part of the Trail of Tears.

All content from Kiddle encyclopedia articles (including the article images and facts) can be freely used under Attribution-ShareAlike license, unless stated otherwise. Cite this article:
U.S. Route 64 in Arkansas Facts for Kids. Kiddle Encyclopedia.