Alma is a city in Crawford County, Arkansas, United States. It is located within the Arkansas River Valley at the edge of the Ozark Mountains, the city is the sixth largest in the Fort Smith metropolitan area. The population was 5,419 at the 2010 Census. The city is located at the intersection of Interstate 40 and Interstate 49.

Alma was incorporated in 1874 and the economy was largely agricultural until the introduction of the canning industry. Today, the city claims the title of "Spinach Capital of the World".

In the town of Alma, Arkansas (population 776), one-fourth of the girls in the 1944 high school graduating class signed up to leave for Washington, and several of their teachers cast aside their low-paying jobs and went with them, all of them climbing aboard a Pullman car for their first train ride, looking for more money and excitement than they had any reasonable expectation of finding in Alma. 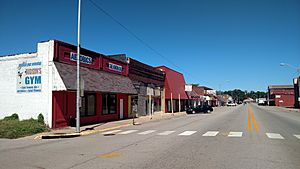 Streetside along Highway 162 in Alma, AR

Alma has no airport, and the train station, which fell into a state of dilapidation, was torn down in the early 1970s. Much of its commerce derives from interstate highway traffic, as Interstates 40 and 49 (previously 540), as well as U.S. Routes 64 and 71, pass through the city.

The city gets its water supply from Alma Lake, which is perched above the city on the northeast, held back by a tall earthen dam that blocks Little Frog Bayou. Alma Lake is the reservoir that supplies the city's tap water. Alma sits along the border between the Boston Mountains and the Arkansas River Valley, so while most of the city lies on flat land, immediately to the north is scenic hill country. Alma is surrounded by several rural towns, including Rudy to the north, Dyer and Mulberry to the east, and Kibler to the southwest. 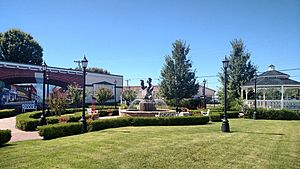 There were 1,560 households out of which 42.8% had children under the age of 18 living with them, 56.1% were married couples living together, 14.7% had a female householder with no husband present, and 25.1% were non-families. 22.3% of all households were made up of individuals and 10.5% had someone living alone who was 65 years of age or older. The average household size was 2.66 and the average family size was 3.11. 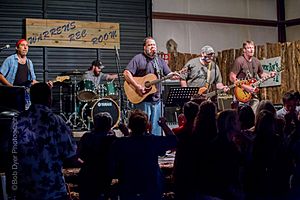 Spinach Capital of the World

Around 1987, Alma called itself the "Spinach Capital of the World" because the Allen Canning Company based in Alma canned more than half of all the spinach canned in the U.S., about 60 million pounds (27,000,000 kg) annually. The town has had various statues of the cartoon character Popeye, because of his connection to canned spinach; the most recent one was erected in 2007. Cast in bronze, it sits atop a fountain holding a can of spinach. It is the centerpiece of Popeye Park. Crystal City Texas is also considered the Spinach Capital of the World.

The annual Spinach Festival is hosted at the City Park and Community Center on the third weekend in April. First held in 1986, the festival is sponsored by the Alma Chamber of Commerce and the Alma Advertising & Promotion Commission. The festival brings carnival rides, crafts, food and live music. A spinach eating contest takes place at noon, followed by a spinach drop. A package of spinach is dropped from an Alma Fire Department ladder truck onto a board with entrant's names, with the winner receiving a cash prize.

All content from Kiddle encyclopedia articles (including the article images and facts) can be freely used under Attribution-ShareAlike license, unless stated otherwise. Cite this article:
Alma, Arkansas Facts for Kids. Kiddle Encyclopedia.