Augusta is a city in Woodruff County, Arkansas, United States, located on the east bank of the White River. The population was 2,199 at the 2010 census. The city is the county seat of Woodruff County.

Augusta is located in the Arkansas Delta, one of the six primary geographic regions of Arkansas. The Arkansas Delta is a subregion of the Mississippi Alluvial Plain, which is a flat area consisting of rich, fertile sediment deposits from the Mississippi River between Louisiana and Illinois. Prior to settlement, Woodruff County was densely forested, with bayous, sloughs, and swamps crossing the land. Seeking to take advantage of the area's fertile soils, settlers cleared the land to better suit row crops.

Although some swampland has been preserved in the Cache River NWR and some former farmland has undergone reforestation, the majority (56 percent) of the county remains in cultivation.

The nearby Cache River NWR, owned by the United States Fish and Wildlife Service, is a preservation area maintaining the original features of the area. Stretching approximately 90 miles (140 km) across adjacent counties, the NWR is listed as a Ramsar wetlands of international importance, and serves as a key wintering area for ducks and the largest contiguous tract of bottomland hardwood forest in North America.

The 64 Speedway was a popular short track motor racing location which closed in 2007.

The Jess Norman Post 166 American Legion Hut on 1st Street was listed on the National Register of Historic Places in 2001. 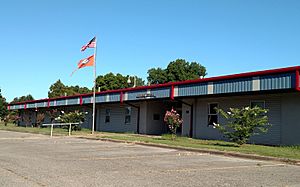 Public education for early childhood, elementary and secondary school students is provided by the Augusta School District, which leads to graduation from Augusta High School.

All content from Kiddle encyclopedia articles (including the article images and facts) can be freely used under Attribution-ShareAlike license, unless stated otherwise. Cite this article:
Augusta, Arkansas Facts for Kids. Kiddle Encyclopedia.