Woodruff County is located in the Arkansas Delta in the U.S. state of Arkansas. The county is named for William E. Woodruff, founder of the state's first newspaper, the Arkansas Gazette. Created as Arkansas's 54th county in 1862, Woodruff County is home to one incorporated town and four incorporated cities, including Augusta, the county seat. The county is also the site of numerous unincorporated communities and ghost towns. Occupying only 587 square miles (152,000 ha), Woodruff County is the 13th smallest county in Arkansas. As of the 2010 Census, the county's population is 7,260 people in 3,531 households. Based on population, the county is the second-smallest county of the 75 in Arkansas. Located in the Arkansas Delta, the county is largely flat with fertile soils. Historically covered in forest, bayous and swamps, the area was cleared for agriculture by early settlers. It is drained by the Cache River and the White River. Along the Cache River, the Cache River National Wildlife Refuge (NWR) runs north-south across the county, preserving bottomland forest, sloughs and wildlife habitat.

Although no Interstate highways are located in Woodruff County, two United States highways (U.S. Route 49 [US 49] and US 64) and twelve Arkansas state highways run in the county. Two Union Pacific Railroad lines cross the county. 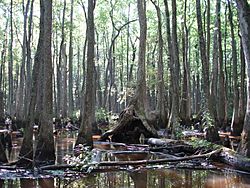 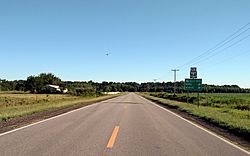 The county is located in the Arkansas Delta, one of the six primary geographic regions of Arkansas. The Arkansas Delta is a subregion of the Mississippi Alluvial Plain, which is a flat area consisting of rich, fertile sediment deposits from the Mississippi River between Louisiana and Illinois. According to the U.S. Census Bureau, the county has a total area of 594 square miles (1,540 km2), of which 587 square miles (1,520 km2) is land and 7.2 square miles (19 km2) (1.2%) is water. Major hydrologic features include the Cache River, which roughly bisects the county north-south, Bayou De View, which runs through eastern Woodruff County, and the White River, which serves as the county's western boundary.

Prior to settlement, Woodruff County was densely forested, with bayous, sloughs, and swamps crossing the land. Seeking to take advantage of the area's fertile soils, settlers cleared the land to better suit row crops. Although some swampland has been preserved in the Cache River NWR and some former farmland has undergone reforestation, the majority (56 percent) of the county remains in cultivation. Another large land use in Woodruff County is the Cache River NWR, owned by the United States Fish and Wildlife Service. Stretching approximately 90 miles (140 km) across adjacent counties, the NWR is listed as a Ramsar wetlands of international importance, and serves as a key wintering area for ducks and the largest contiguous tract of bottomland hardwood forest in North America. The NWR aggressively seeks willing property owners to sell land to add to the NWR's boundaries, adding 2,000 acres (810 ha) in 2015. 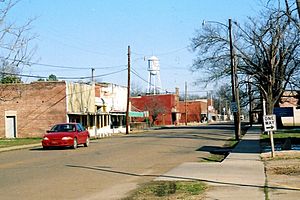 Four incorporated cities and one incorporated towns are located within the county. The largest city and county seat, Augusta, is located in the western part of the county near the White River and the White County border. Augusta's population in 2010 was 2,199—well below its peak of 3,496 at the 1980 Census. McCrory and Patterson are adjacent to each other, located near the county's center. Cotton Plant and Hunter are both located in the southern part of Woodruff County, with 2010 populations of 649 and 105, respectively.

Woodruff County has dozens of unincorporated communities and ghost towns within its borders. This is due to early settlers in Arkansas tending to cluster in small clusters rather than incorporated towns. For example, Fitzhugh and Gregory had post offices at some point in their history. Other communities are simply a few dwellings at a crossroads that have adopted a common place name over time. Some are officially listed as populated places by the United States Geological Survey, and others are listed as historic settlements.

Townships in Arkansas are the divisions of a county. Each township includes unincorporated areas; some may have incorporated cities or towns within part of their boundaries. Arkansas townships have limited purposes in modern times. However, the United States Census does list Arkansas population based on townships (sometimes referred to as "county subdivisions" or "minor civil divisions"). Townships are also of value for historical purposes in terms of genealogical research. Each town or city is within one or more townships in an Arkansas county based on census maps and publications. The townships of Woodruff County are listed below; listed in parentheses are the cities, towns, and/or census-designated places that are fully or partially inside the township. 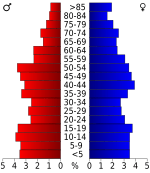 All content from Kiddle encyclopedia articles (including the article images and facts) can be freely used under Attribution-ShareAlike license, unless stated otherwise. Cite this article:
Woodruff County, Arkansas Facts for Kids. Kiddle Encyclopedia.