Jackson County is located in the Arkansas Delta in the U.S. state of Arkansas. The county is named for Andrew Jackson, a national hero during the War of 1812. By the county's formation in 1829, Jackson had become the seventh President of the United States. Jackson County is home to seven incorporated towns and four incorporated cities, including Newport, the largest city and county seat. The county is also the site of numerous unincorporated communities and ghost towns. Occupying 633.94 square miles (164,190 ha), Woodruff County is the 41st largest county of the 75 in Arkansas. As of the 2010 Census, the county's population is 17,997 people in 7,601 households. Based on population, the county is the 40th-largest county in Arkansas. Although terrain rises in the west, most of Jackson County is within the Arkansas Delta, characterized by largely flat terrain with fertile soils. Historically covered in forest, bayous and swamps, the area was cleared for agriculture by early settlers. It is drained by the White River.

Although no Interstate highways are located in Jackson County, two United States highways (U.S. Route 67 (US 67) and US 167) and fifteen Arkansas state highways run in the county. A Union Pacific Railroad line also crosses the county. 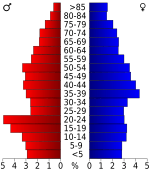 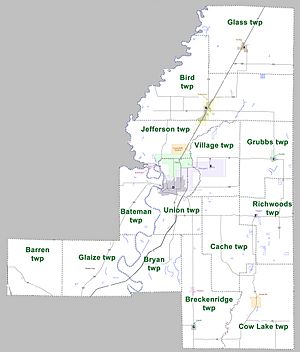 Townships in Jackson County, Arkansas as of 2010

Townships in Arkansas are the divisions of a county. Each township includes unincorporated areas; some may have incorporated cities or towns within part of their boundaries. Arkansas townships have limited purposes in modern times. However, the United States Census does list Arkansas population based on townships (sometimes referred to as "county subdivisions" or "minor civil divisions"). Townships are also of value for historical purposes in terms of genealogical research. Each town or city is within one or more townships in an Arkansas county based on census maps and publications. The townships of Jackson County are listed below; listed in parentheses are the cities, towns, and/or census-designated places that are fully or partially inside the township.

All content from Kiddle encyclopedia articles (including the article images and facts) can be freely used under Attribution-ShareAlike license, unless stated otherwise. Cite this article:
Jackson County, Arkansas Facts for Kids. Kiddle Encyclopedia.