Craighead County is a county located in the U.S. state of Arkansas. As of the 2010 census, the population was 96,443. The county has two county seats — Jonesboro and Lake City. Craighead County is Arkansas's 58th county, formed on February 19, 1859, and named for state Senator Thomas Craighead. It is one of several dry counties within the state of Arkansas, in which the sale of alcoholic beverages is largely prohibited.

Craighead County was part of the territory claimed by France on April 9, 1682 by René Robert Cavelier, Sieur de La Salle who laid claim to all of the land drained by the Mississippi River and its assorted tributaries. LaSalle's claim was named Louisiana in honor of Louis XIV, King of France.

The Treaty of Fontainebleau (1762) was signed between France and Spain and ownership of the Louisiana territory west of the Mississippi River was transferred to the Spanish crown as a result of the Seven Years' War and Craighead County became a Spanish possession.

Spain remained in control of the territory encompassing the county until October 1, 1800 when Napoleon Bonaparte forced Spain to return the lost territories to France under the Treaty of Ildefonso. Napoleon maintained grandiose plans to establish a vast French Empire in Louisiana but the Royal Navy prevented him from transferring troops or settlers to the acquired territories.

Fear was high in the United States that Napoleon would attempt to close the Mississippi River to American trade. President Thomas Jefferson inquired about purchasing an area near the mouth of the river to ensure that it would stay open to American goods. Napoleon, having realized that his plans could not come to fruition, offered to sell the United States the entire territory of Louisiana, including Craighead County, for $23,213,568.

The treaty was finalized in 1803 and the land that would become Craighead County became the possession of the United States.

Craighead County remained in the Louisiana Territory until the State of Louisiana was admitted to the Union. At that time the territory that includes modern day Arkansas was attached to the Missouri Territory.

In 1813 the area was included in a new political subdivision known as Arkansas County which was a political subdivision of the Arkansas District of the Territory of Missouri. In 1815 the county was further subdivided and Lawrence County was formed with its seat at Davidsonville. This new county included most of what is now northern Arkansas. The modern Craighead county lay partially within Arkansas County and partially within Lawrence County.

Residents of the Missouri Territory soon began petitioning Congress for admission to the Union. Their request did not include the District of Arkansas and Arkansas residents petitioned for separate territorial status for their district. In 1819 the Arkansas Territory was formed.

In 1838, Poinsett County was formed and included most of present-day Craighead County. This situation persisted until 1850 when residents of the area complained about the distance to the Poinsett County seat.

The new county was to be formed from lands taken from Greene, Mississippi, and Poinsett counties, and it was to be named "Crowley County" in honor of Crowley's Ridge which runs through the center of the county.

Senator Thomas Craighead represented Mississippi County, and opposed the bill because the farmland it took from Mississippi County (commonly known as the Buffalo Island area) was a major source of property taxes for the county.

Craighead County was officially formed February 19, 1859; in gratitude, the citizens then named the main county seat Jonesboro, for Senator Jones. (Some sources say the name was actually proposed by Senator Craighead in a resolution.) Lake City, just across the St. Francis River from the Buffalo Island area, was added as a second county seat in 1883. 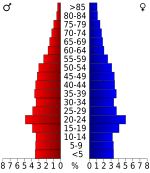 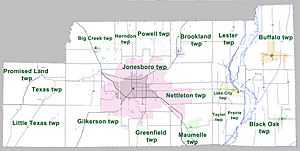 Townships in Craighead County, Arkansas as of 2010

Townships in Arkansas are the divisions of a county. Each township includes unincorporated areas; some may have incorporated cities or towns within part of their boundaries. Arkansas townships have limited purposes in modern times. However, the United States Census does list Arkansas population based on townships (sometimes referred to as "county subdivisions" or "minor civil divisions"). Townships are also of value for historical purposes in terms of genealogical research. Each town or city is within one or more townships in an Arkansas county based on census maps and publications. The townships of Craighead County are listed below; listed in parentheses are the cities, towns, and/or census-designated places that are fully or partially inside the township.

All content from Kiddle encyclopedia articles (including the article images and facts) can be freely used under Attribution-ShareAlike license, unless stated otherwise. Cite this article:
Craighead County, Arkansas Facts for Kids. Kiddle Encyclopedia.