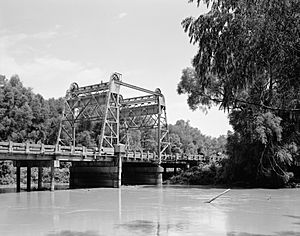 The St. Francis River Bridge in Lake City is listed on the National Register of Historic Places.

The St. Francis River Bridge located in Lake City is the only lift bridge in the world that has been raised only once since its construction. To construct a four-lane highway, a new bridge was constructed in 2002 and the lift bridge was moved to a location just south of the new bridge where it remains as a landmark.

Lake City is part of the Riverside School District, formed as a result of consolidation with the Lake City School District with that of nearby Caraway on July 1, 1985. The Riverside High School mascot and athletic teams are known as "the Rebels". There are two elementary schools associated with the school: one is located in Lake City and the other in Caraway.

All content from Kiddle encyclopedia articles (including the article images and facts) can be freely used under Attribution-ShareAlike license, unless stated otherwise. Cite this article:
Lake City, Arkansas Facts for Kids. Kiddle Encyclopedia.