Greene County is a county located in the U.S. state of Arkansas. As of the 2010 census, the population was 42,090. The county seat is Paragould, which sits atop Crowley's Ridge.

The first settler in the area was Benjamin Crowley, who arrived from Kentucky in 1821 and made his home about 12 miles west of Paragould.

Greene County was formed on 5 November 1833 out of portions of Lawrence County and originally contained parts of present Clay and Craighead counties. The county was named for Revolutionary War hero Nathanael Greene. The first county seat was in Benjamin Crowley's home. By 1836, when Arkansas became a state, the county seat was located in a settlement called "Paris" (not to be confused with present-day Paris, Arkansas).

In 1848 a national highway was made through the area, and the county seat was moved to Gainesville, which had a reputation as rather lawless. The seat remained there until 1883, when it was transferred to the new town of Paragould. The peoples in Gainesville opposed the move, and shots reportedly were fired, since tempers were high. The courthouse was built in 1888 and survives in downtown Paragould. 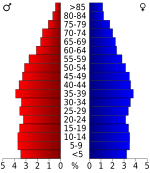 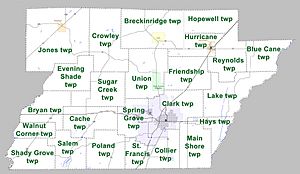 Townships in Greene County, Arkansas as of 2010

Townships in Arkansas are the divisions of a county. Each township includes unincorporated areas; some may have incorporated cities or towns within part of their boundaries. Arkansas townships have limited purposes in modern times. However, the United States Census does list Arkansas population based on townships (sometimes referred to as "county subdivisions" or "minor civil divisions"). Townships are also of value for historical purposes in terms of genealogical research. Each town or city is within one or more townships in an Arkansas county based on census maps and publications. The townships of Greene County are listed below; listed in parentheses are the cities, towns, and/or census-designated places that are fully or partially inside the township.

All content from Kiddle encyclopedia articles (including the article images and facts) can be freely used under Attribution-ShareAlike license, unless stated otherwise. Cite this article:
Greene County, Arkansas Facts for Kids. Kiddle Encyclopedia.