Randolph County is located between the Ozark Mountains and Arkansas Delta in the U.S. state of Arkansas. The county is named for John Randolph, a U.S. senator from Virginia influential in obtaining congressional approval of the Louisiana Purchase, which includes today's Randolph County. Created as Arkansas's 32nd county on October 29, 1835, Randolph County has two incorporated cities, including Pocahontas, the county seat and most populous city. The county is also the site of numerous unincorporated communities and ghost towns.

Crossed by five rivers, most of Randolph County contains foothills and valleys typical of the Ozarks. However, the eastern side of the county is largely flat with fertile soils typical of the Delta, with the Black River roughly dividing the regions. The county contains three protected areas: two Wildlife Management Areas and Davidsonville Historic State Park, which preserves and interprets an early pioneer settlement. Other historical features such as log cabins, one-room school houses, community centers, and museums describe the history and culture of Randolph County.

Randolph County occupies 656.04 square miles (169,910 ha) and contained a population of 17,969 people in 7,299 households as of the 2010 Census, ranking it 38th in size and 41st in population among the state's 75 counties. The economy is largely based on agriculture and small manufacturing. Poverty and unemployment rates are above national averages, but steady. Household incomes are below state and national averages. Politically, Randolph County has transitioned from reliably Democratic to steadily Republican since the mid-20th century.

Randolph County is served by two school districts, Pocahontas School District and Maynard School District, and parts of three others. Higher education is provided at Black River Technical College, a public two-year community college in Pocahontas. Five Rivers Medical Center in Pocahontas is a community hospital providing primary care in the county. Although no Interstate highways serve Randolph County, the county has access to three United States highways (U.S. Route 62 [US 62], US 67, and US 412) and eleven Arkansas state highways. Randolph County is also served by one public owned/public use general aviation airport, Pocahontas Municipal Airport, and six community water systems provide potable water to customers in the county.

Randolph County is located where the foothills of the Ozark Mountains intersect the Arkansas Delta (in Arkansas, usually referred to as "the Delta") in the southeast part of the county. Two of the six primary geographic regions of Arkansas, the Ozarks are a mountainous subdivision of the U.S. Interior Highlands, and the Arkansas Delta is a subregion of the Mississippi Alluvial Plain, which is a flat area consisting of rich, fertile sediment deposits from the Mississippi River between Louisiana and Illinois. The Black River roughly divides the two regions in Randolph County. According to the U.S. Census Bureau, the county has a total area of 656.04 square miles (1,699.1 km2), of which 651.83 square miles (1,688.2 km2) is land and 4.21 square miles (10.9 km2) (0.6%) is water. 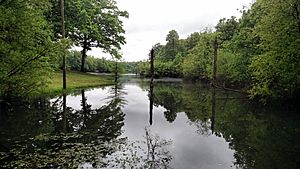 Water is an extremely important part of Randolph County's geography, history, economy, and culture. The many rivers, streams, and ditches crossing the county have featured prominently since prehistoric times, and many of the hundreds of archaeological sites are along waterways. Tribes of Lenape, Shawnee, and Cherokee were settled in the area along rivers but left the area following the 1811–12 New Madrid earthquakes.

The Spring River serves as the county's southwestern boundary with Lawrence County between Davidsonville Historic State Park and Ravenden. The Eleven Point River enters from Missouri near Billmore and runs south to empty into the Spring just west of the state park.

Rivers brought early prosperity to the county during white settlement for navigation. Control of the rivers and Pitman's Ferry lead to military action in the county during the Civil War, including a skirmish in 1862. Following the war, natural hot springs at Warm Springs and Ravenden Springs attracted visitors to the area.

Davidsonville Historic State Park is a 163-acre (66 ha) history state park focused on the interpretation and archaeology of the abandoned frontier town of Davidsonville. Once a very important stop on the Black River and Southwest Trail within Arkansaw Territory, Davidsonville was abandoned by 1836 following the decline of river transport and the shifting of the Southwest Trail. The park is owned and operated by the Arkansas Department of Parks and Tourism.

There were 7,299 households out of which 30.5% had children under the age of 18 living with them, 53.1% were married couples living together, 10.7% had a female householder with no husband present, and 31.5% were non-families. 27.7% of all households were made up of individuals and 14.1% had someone living alone who was 65 years of age or older. The average household size was 2.41 and the average family size was 2.92. 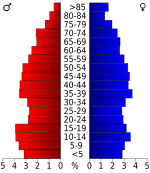 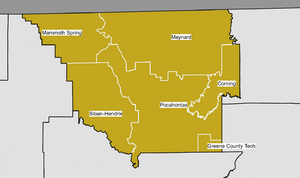 Public school district boundaries in Randolph County as of July 2016

Two public school districts are based in Randolph County; the Pocahontas School District is the largest school district in Randolph County, with the Maynard School District serving the northeast corner of the county. Successful completion of the curriculum of these schools leads to graduation from Pocahontas High School or Maynard High School, respectively. Both high schools offer Advanced Placement (AP) courses, concurrent credit agreements with nearby Black River Technical College (BRTC), and are accredited by the Arkansas Department of Education (ADE). Additionally, Pocahontas HS is accredited by AdvancED.

Randolph County's above-average poverty rate also indicates a high Medicaid eligibility rate. As of 2012, 38.1% of Randolph County was eligible for Medicaid, with 65.1% of children under 19 eligible for ARKids First, a program by the Arkansas Department of Human Services that combines children's Medicaid (ARKids A) and other programs for families with higher incomes (ARKids B). The county's population is significantly above healthy weight, with 71.7% of adults and 41.2% of children/adolescents ranking as overweight or obese, above the state averages of 67.1% and 39.3%, themselves significantly above national averages of 62.9% and 30.3%, respectively. 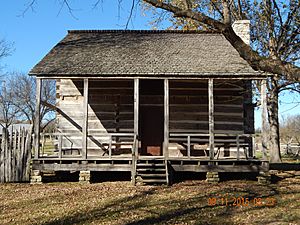 Built c. 1826, the Rice-Upshaw log structure is one of the oldest buildings in Arkansas

Randolph County has several facilities, monuments, and museums dedicated to preserving the history and culture of the area. Several historic log structures remain in the county from the pioneer era. The Rice-Upshaw House, a 1820s-era log cabin near Dalton, is one of the oldest structures in Arkansas. Randolph County also includes Hillyard Cabin and the Looney-French House, both listed on the National Register of Historic Places.

Randolph County is currently an alcohol prohibition or dry county.

Two incorporated cities and four incorporated towns are located within the county. The largest city and county seat, Pocahontas, is located in the south-central part of the county on the Black River. Pocahontas' population in 2010 was 6,608, and has been increasing since the 1960 Census. The county's small towns all have a population under 500 as of the 2010 Census, with Ravenden Springs the smallest at 118 in western Randolph County. The remaining communities are in the Delta portion of the county: Maynard north of Pocahontas, Biggers and Reyno (the other city) along US 67 near the county's eastern border, and O'Kean in the southeastern corner.

Randolph County has dozens of unincorporated communities and ghost towns within its borders. This is due to early settlers in Arkansas tending to settle in small clusters rather than incorporated towns. For example, communities like Davidsonville had a post office and dozens of buildings at some point in their history. Other communities are simply a few dwellings at a crossroads that have adopted a common place name over time. Some are officially listed as populated places by the United States Geological Survey, and others are listed as historic settlements. 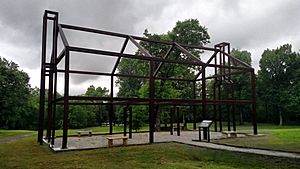 A "ghost structure" in Davidsonville Historic State Park. The park preserves and interprets the history of one of Arkansas's earliest settlements, which was abandoned by the 1830s. 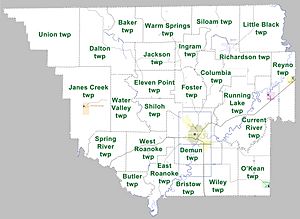 Townships in Randolph County, Arkansas as of 2010

Townships in Arkansas are the divisions of a county. Each township includes unincorporated areas; some may have incorporated cities or towns within part of their boundaries. Arkansas townships have limited purposes in modern times. However, the United States Census does list Arkansas population based on townships (sometimes referred to as "county subdivisions" or "minor civil divisions"). Townships are also of value for historical purposes in terms of genealogical research. Each town or city is within one or more townships in an Arkansas county based on census maps and publications. The townships of Randolph County are listed below; listed in parentheses are the cities, towns, and/or census-designated places that are fully or partially inside the township.

All content from Kiddle encyclopedia articles (including the article images and facts) can be freely used under Attribution-ShareAlike license, unless stated otherwise. Cite this article:
Randolph County, Arkansas Facts for Kids. Kiddle Encyclopedia.