Kids Encyclopedia Facts
This page is about the section of U.S. Route 67 in Arkansas. For the entire route, see U.S. Route 67.

U.S. Route 67 (US 67) is a U.S. highway running from Presidio, Texas northeast to Sabula, Iowa. In the U.S. state of Arkansas, the route runs 279.15 miles (449.25 km) from the Texas border in Texarkana northeast to the Missouri border near Corning. The route passes through several cities and towns, including Hope, Benton, Little Rock, Jacksonville, Cabot, Beebe, Walnut Ridge, and Pocahontas.

US 67 enters Arkansas from Texas in Texarkana, concurrent with US 82, along the one-way 7th Street; the other half of the one-way couplet, Dr. Martin Luther King Jr. Boulevard, carries traffic toward Texarkana, Texas. Upon crossing State Line Avenue, the two routes share a brief concurrency with US 71 before that route turns to the south along Hickory Street. Past this intersection, the one-way couplet merges onto 9th Street. Shortly thereafter, US 67 separates from US 82 and travels to the northeast along Broad Street, crossing Interstate 49 and passing Texarkana Regional Airport.

US 67 then runs parallel to Interstate 30, passing through cities such as Hope, Prescott, Arkadelphia, and Malvern. Near Benton, US 67 merges with I-30. The two routes run concurrently to Little Rock, where the freeway also picks up US 65 and US 167. In North Little Rock, US 67 and US 167 turn to the east, concurrent with Interstate 40 for about 2 miles (3.2 km), before branching off to the northeast as a freeway.

In Beebe, the two routes begin a concurrency with U.S. 64. The three routes part ways in Bald Knob, with US 67 continuing as a freeway to the northeast. Just north of US 412 in Walnut Ridge, the freeway ends at a large, partially-complete interchange, and US 67 becomes a five-lane undivided highway north to Pocahontas. From Pocahontas, the road turns northeasterly and then easterly as a two-lane highway concurrent with US 62. In Corning, US 62 continues to the east while US 67 turns northward again before crossing the Missouri state line. 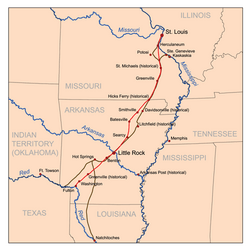 Original trace of the Southwest Trail, precursor to U.S. Route 67 in the area.

The southwest-northeast bisector of Arkansas has always been an integral motor route. Prior to designation as US 67, the route was known as the Southwest Trail, an old military road around 1803. The Southwest Trail connected St. Louis, Missouri with Texas by steamboat in Fulton, Arkansas. The main railroad was built along the Southwest Trail, which developed many towns along the route. President Andrew Jackson appropriated money for the route in 1831, and designated it as a National Road. Although the route shifted slightly, it always has followed the natural break between the Ozark Mountains and the Ouachita Mountains and the Mississippi Alluvial Plain.

Money for road maintenance was raised individually by county in the early 20th century, which hindered development of the route. In the 1920s, federal money became available, and the route was designated U.S. Route 67. The routing followed the Lakes to Gulf Highway and the Bankhead Highway. Federal designation brought paving to the route, which grew the small towns along the route.

In early 2009, the Arkansas legislature passed a bill naming the portion of US-67 from the Missouri state line to Jackson County "Rock n' Roll U.S. 67" as a tribute to the route that many musicians of the 1950s and 1960s took as they traveled. Governor Mike Beebe stated that he had hopes that the naming would bring tourism to northeast Arkansas. Portions of the route, and also Arkansas Highway 7 between Hope and Hot Springs frequently used by Bill Clinton is designated The Highway of Hope by Arkansas Code § 27-67-220.

Several portions of the original late 1920s alignment of US 67 have survived, some of which are listed on the National Register of Historic Places. One listed segment is in Lawrence County, which is about 11.25 miles (18.11 km) in length, and runs north from Alicia to Hoxie, most of this being sandwiched between the present Arkansas Highway 367 and US 67, and the adjacent railroad tracks. Near the village of Village Creek Relief it briefly turns west, crossing Village Creek, and then rejoining the railroad tracks near the town of Relief. A second listed segment, also about 11 miles (18 km) in length, extends from Biggers in central eastern Randolph County, northeast to Datto in Clay County, and then straight north to a junction with Arkansas Highway 211.

Listed on the NRHP as Old US 67, Mandeville, a historic roadway section of US 67 is preserved in Miller County, Arkansas. It travels parallel to railroad tracks of the Union Pacific Railroad for 5.5 miles (8.9 km) from an intersection with Highway 237, just north of the Texarkana Airport, northeast to Miller County Road 63. The southern portion of this road is called Mandeville Road, and is designated Arkansas Highway 296. It is eventually redesignated Miller County Road 138, and is an unnamed side road of the current alignment of U.S. Route 67 (US 67) in its northernmost stretch. Built in 1929 out of concrete, it is the longest stretch of original pavement on the Old US 67 alignment in Miller County.

The roadway was listed on the National Register of Historic Places in 2004.

All content from Kiddle encyclopedia articles (including the article images and facts) can be freely used under Attribution-ShareAlike license, unless stated otherwise. Cite this article:
U.S. Route 67 in Arkansas Facts for Kids. Kiddle Encyclopedia.