Clay County is a county located in the U.S. state of Arkansas. As of the 2010 census, the population was 16,083. The county has two county seats, Corning and Piggott. It is a dry county, in which the sale of alcoholic beverages is restricted or prohibited.

When Clay County was created as Arkansas's 67th county on March 24, 1873 (along with Baxter County), it was named Clayton County, after John M. Clayton, then a member of the Arkansas Senate and a brother of then-U.S. Senator Powell Clayton, though some sources suggest it may have been named for Powell Clayton instead.

Two years later on December 6, 1875, the county's name was shortened to "Clay" by the Arkansas General Assembly. Some claim it was renamed for the statesman Henry Clay, while others say John M. Clayton remained its official namesake. The name change apparently was inspired by lingering distrust of Powell Clayton, as he had declared martial law and suspended elections in the county in 1868 when he was Governor of Arkansas and it was still part of Greene County.

The first county seat was Corning, established in 1873, with the arrival of the St. Louis, Iron Mountain and Southern Railway, as the first incorporated town in the county. The county seat was moved to Boydsville in 1877, because people living east of the Black and Cache Rivers had difficulty getting to Corning during the flood season. However, this caused problems for those living west of the rivers, and in 1881 Corning was re-established as the seat of the Western District, with Boydsville remaining the seat for the Eastern District. With the arrival of the St. Louis, Arkansas and Texas Railroad in 1882, other towns such as Greenway, Rector and Piggott experienced growth. In 1887, the Eastern District seat was moved to Piggott, and the dual county seat system remains in place today. Important county functions (such as the Quorum Court) alternate between Piggott and Corning as their venues.

On April 6, 1972, Sheriff Douglas Batey and deputies Glen Ray Archer and Troy Key were shot and killed while trying to serve a warrant on Bert Grissom. Grissom opened fire as soon as the men stepped out of their car. He later surrendered without resistance to another deputy, and was tried, convicted, and sentenced to life in prison. William Thomas Pond became sheriff, but he died in an automobile accident on June 8, 1973. Four of the five police officers who have lost their lives serving the Clay County Sheriff's Office died in these two incidents. 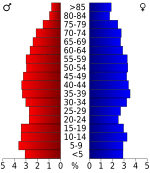 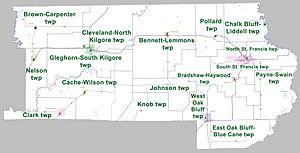 Townships in Clay County, Arkansas as of 2010

Townships in Arkansas are the divisions of a county. Each township includes unincorporated areas; some may have incorporated cities or towns within part of their boundaries. Arkansas townships have limited purposes in modern times. However, the United States Census does list Arkansas population based on townships (sometimes referred to as "county subdivisions" or "minor civil divisions"). Townships are also of value for historical purposes in terms of genealogical research. Each town or city is within one or more townships in an Arkansas county based on census maps and publications. The townships of Clay County are listed below; listed in parentheses are the cities, towns, and/or census-designated places that are fully or partially inside the township.

All content from Kiddle encyclopedia articles (including the article images and facts) can be freely used under Attribution-ShareAlike license, unless stated otherwise. Cite this article:
Clay County, Arkansas Facts for Kids. Kiddle Encyclopedia.