Corning is a city in Clay County, Arkansas, United States. The population was 3,377 at the 2010 census. It is one of the two county seats of Clay County, along with Piggott. 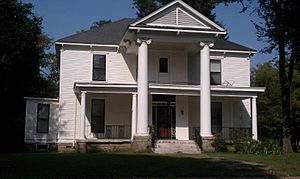 The original settlement was about one mile east and was called Hecht City, named for brothers Levi and Solomon Hecht who operated a lumber mill on the Black River. Hecht City moved to the present site of Corning in 1871, when the Cairo and Fulton Railroad surveyed the land for the proposed route. The railroad through the settlement was completed by 1872. On February 5, 1873, the name was changed from Hecht City to Corning, in honor of H. D. Corning, an engineer with the railroad.

The city of Corning went through a massive period of growth in the early part of the 20th century. In the 1960s and 1970s it was the site of many industrial manufacturing developments.

Corning was the site of a large explosion on Wednesday, March 9, 1966. The pre-dawn explosion originated in a munitions railcar and fortunately resulted in only one minor injury in the small town. The explosion was widely reported in the surrounding region.

Two properties in Corning are list on the National Register of Historic Places: Sheeks House, and Oliver House.

There were 1,553 households out of which 27.9% had children under the age of 18 living with them, 51.6% were married couples living together, 10.5% had a female householder with no husband present, and 34.4% were non-families. 30.7% of all households were made up of individuals and 18.2% had someone living alone who was 65 years of age or older. The average household size was 2.32 and the average family size was 2.88.

Industry in Corning is dominated by agriculture-related industries such as farm equipment sales, farm equipment repair, seed processing and sales, and fertilizer and chemicals. Forestry was a primary industry in the late 1800s, but gave way to farming of rice, soybeans, hard red winter wheat, and other grains.

The climate in this area is characterized by hot, humid summers and generally mild to cool winters. According to the Köppen Climate Classification system, Corning has a humid subtropical climate, abbreviated "Cfa" on climate maps.

All content from Kiddle encyclopedia articles (including the article images and facts) can be freely used under Attribution-ShareAlike license, unless stated otherwise. Cite this article:
Corning, Arkansas Facts for Kids. Kiddle Encyclopedia.