Kids Encyclopedia Facts
This page is about the county in southeastern Missouri. For the city in Bates County, in western Missouri, see Butler, Missouri.

Butler County is a county located in the southeast Ozark Foothills Region in the U.S. state of Missouri. As of the 2020 Census, the county's population was 42,130. The largest city and county seat is Poplar Bluff. The county was officially organized from Wayne County on February 27, 1849, and is named after former U.S. Representative William O. Butler (D-Kentucky), who was also an unsuccessful candidate for Vice President of the United States. The first meeting in the Butler County Courthouse was held on June 18, 1849.

According to the Association of Religion Data Archives County Membership Report (2010), Butler County is part of the Bible Belt, with evangelical Protestantism being the most predominant religion. The most predominant denominations among residents in Butler County who adhere to a religion are Southern Baptists (36.39%), nondenominational evangelical groups (14.64%), and Roman Catholics (11.92%). 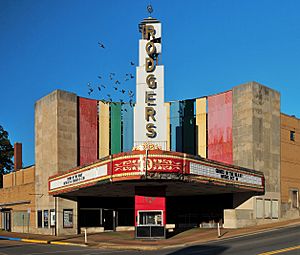 Of adults 25 years of age and older in Butler County, 70.5% possesses a high school diploma or higher while 11.6% holds a bachelor's degree or higher as their highest educational attainment.

All content from Kiddle encyclopedia articles (including the article images and facts) can be freely used under Attribution-ShareAlike license, unless stated otherwise. Cite this article:
Butler County, Missouri Facts for Kids. Kiddle Encyclopedia.