Kids Encyclopedia Facts
This page is about the city in Bates County, in western Missouri. For the county in southeastern Missouri, see Butler County, Missouri.

Butler is a city in Bates County, Missouri, United States and is part of the Kansas City metropolitan area. The population was 4,219 at the 2010 census. The county seat of Bates County, the city is named for William Orlando Butler, a noted American military and political figure of the early and mid-19th century. It is located approximately fifty miles south of Kansas City, Missouri on U.S. Route 71-Interstate 49.

When originally laid out in April 1852, Butler was a short distance from its later and current location, with John C. Kennett being recognized as the first settler to build a home. The plat for Butler was filed in August, 1853 and consisted of five lots on fifty-five acres of donated land. The first county seat for Bates County was Papinville.

After a large portion of the county was split off to form Vernon County in 1855, Papinville was no longer near the geographic center, and Butler was selected in 1856 as the county seat. County officials shortly thereafter selected the contracting firm of Fitzpatrick & Hurt to construct a fifty-by-fifty foot brick courthouse at a cost of $5,000. This building served the county until being gutted by fire in 1861. The year 1856 also saw the establishment of Butler's first general mercantile store was established in 1856, with several others following in the years prior to the Civil War's outbreak in 1861.

During the Civil War western Missouri was engulfed in insurgent Confederate actions and raids by Union forces. Personal conflicts were also played out in the war's violence. Early in the conflict a major fire destroyed not only the Bates County courthouse but nearly all of the surrounding square of businesses and the town's first church. The arson fire was the handiwork of a squad of volunteer Kansas cavalry acting on orders of Jayhawker Colonel James Montgomery. A company of pro-Confederate Missouri State Guard cavalry under Sidney D. Jackman arrived too late to stop the arson, but they pursued the Kansans back across the border, killing and wounding several. During much of the spring and summer of 1862, the town was occupied by Union Colonel Fitz Henry Warren and elements of the 1st Regiment Iowa Volunteer Cavalry. Arriving in April, they stayed until mid-August when they left for Clinton, Missouri, followed closely by Confederate troops under Colonel Jackman and General Vard Cockrell. The opposing groups would finally meet a few days later at the Battle of Lone Jack in Jackson county. 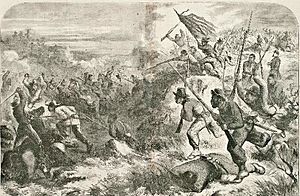 The Battle of Island Mound as depicted in an 1863 Harper's Weekly woodcut.

Two months later a Civil War milestone took place in Bates County at a site approximately eight miles southwest of Butler. This was the first combat against Confederates by African Americans fighting for the Union. During the Battle of Island Mound (aka "Battle of Fort Toothman") on October 28–29, 1862, the Union 1st Kansas Colored Volunteers—composed of former slaves who had escaped from Arkansas and Missouri—and a scouting element from the 5th Kansas Volunteer Cavalry engaged a numerically superior force of Confederate guerrillas and recent Missouri State Guard recruits led by Vard Cockrell and Bill Truman (a relative of future President Harry S. Truman). The Union forces crossed into Missouri on a mission to clear Confederate guerrillas from an area known as "Hog Island". The Union troops commandeered and fortified the homestead of Confederate guerrilla Enoch John Toothman. The next day a detachment engaged with mounted Confederate cavalry, but stood their ground. The Confederates withdrew from the area on October 29. Eight Union men were killed and an estimated 30-40 Confederates.

On August 25, 1863 Union Army General Thomas Ewing issued his controversial Order No. 11, requiring evacuation of all rural residents from the county. Ostensibly it was a response to the raid on Lawrence, Kansas by Confederate guerrillas under William Quantrill and a means to cut off materiel support for further bushwhacker activity. Opponents believed it was a personal vendetta by Ewing, an abolitionist from Kansas who lost several friends in the raid. Order No. 11 called for the forced evacuation of the rural residents of Bates and three other border counties (Cass, Jackson, and Vernon) within 15 days of issuance. All rural residents of the affected counties, regardless of their allegiance, were forced to leave their farms and homes.

Those who could prove their loyalty to the Union were allowed to remain in the counties but required to move to communities near Union military outposts. Those unwilling or unable to prove loyalty were ordered to move from the counties altogether or face imprisonment. Among the forced evacuees were Solomon and Hattie (Gregg) Young and their daughter Martha, the maternal grandparents and mother of future President Harry Truman. Butler was left a virtual ghost town. When residents returned later near war's end, the town and much of the county as a whole had been burned, looted, and otherwise destroyed by regular Union forces, pro-Union Jayhawkers, and Kansas "Red Legs".

Post-Bellum: A temporary structure for county business and court activities was constructed in late 1865 but proved inadequate. In 1869 a much larger two-story brick courthouse was constructed at a cost of $23,000. While slowly continuing its recovery, Butler was finally incorporated as a village on June 19, 1872. Seven years later, on April 7, 1879 Butler was reincorporated as a fourth-class city, with William Page serving as the first mayor. Numerous mills and grain elevators became part of the growing Butler business community through the 1870s, providing opportunities for surrounding farms to process wool and various grains.

Butler gained electric power in 1881, being one of the first communities west of the Mississippi River to offer that convenience. Four large lights were mounted atop the Bates County courthouse, providing illumination for the downtown area. Butler became known as "The Electric City." The 1869 courthouse survived until 1899 when it was found to be structurally unsound; it was closed and demolished.

After passage of a bond issue, construction on the current Bates county courthouse began in 1901. The eighty-by-one hundred five foot Romanesque-style structure was built of "Carthage stone" from southern Missouri at a total project cost of $50,000 and was occupied in July, 1902. By the early 20th century Butler's business listings included three banks, an opera house, four hotels, and a large number of general and specialty stores.

In 2008 Bates county residents erected a statue and plaque honoring the 1st Kansas Colored Volunteers and the Battle of Island Mound on the grounds of the Bates County courthouse in Butler. The State of Missouri purchased a 40-acre property including part of the former Toothman homestead and established the "Battle of Island Mound State Historic Site" in October 2012.

The Bates County Courthouse and Palace Hotel are listed on the National Register of Historic Places.

Butler is considered a part of the Kansas City metropolitan area.

The town has a lending library, the Butler Public Library.

All content from Kiddle encyclopedia articles (including the article images and facts) can be freely used under Attribution-ShareAlike license, unless stated otherwise. Cite this article:
Butler, Missouri Facts for Kids. Kiddle Encyclopedia.