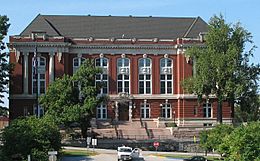 Unless their case involves one of those five issues, people who want a trial court's decision reviewed must appeal to the Missouri Court of Appeals. Most of these cases involve routine legal questions and end there. The Court of Appeals is divided geographically into the "Eastern District", "Western District" and "Southern District".

Certain cases may be transferred to the Supreme Court at the Court's own discretion. These include cases of general interest or importance. They look at cases where the laws should be re-examined. They also review cases that the lower court's decision conflicts with an earlier appellate decision. This is similar to the process the United States Supreme Court uses in accepting cases. In addition, the Court of Appeals may transfer a case to the Supreme Court after an opinion is issued. This can be either upon request of one of the parties or at the request of one of the judges on the appellate court.

In 1820, when it was first established, there were three judges on the Supreme Court. In 1872 the number was increased to five judges. In 1890, the court was increased again to its present size of seven judges.

In 1890, the court was divided into two divisions. This allowed it to handle more cases and make quicker decisions. In 1976, the two divisions were eliminated by a constitutional amendment. The court now rules on cases En banc (all judges together) so decisions are made by the entire court.

Judges of the court are selected through the nonpartisan plan, nationally known as the Missouri Plan. Under the plan, the Appellate Judicial Commission submits the names of three nominees to the Governor. If the Governor fails to make an appointment with 60 days of the nominees being named, the Commission shall make the appointment. Once the judge has served for at least a year, he or she is placed on the general election ballot for vote of the people to keep their seat. If retained, judges serve a term of 12 years. The constitution requires that all judges retire by age 70.

All content from Kiddle encyclopedia articles (including the article images and facts) can be freely used under Attribution-ShareAlike license, unless stated otherwise. Cite this article:
Supreme Court of Missouri Facts for Kids. Kiddle Encyclopedia.