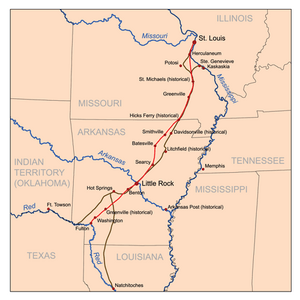 Map showing the Southwest Trail or Military Road as it was in the mid-1800s (in red) and the Natchitoches Trace that it replaced (in brown).

The Southwest Trail was a 19th-century pioneer route that was the primary passageway for American settlers bound for Texas.

The Southwest Trail, also known as the Old Military Road, replaced the older Natchitoches Trace, which ran from the mouth of the Missouri River, near present-day St. Louis, Missouri to present-day Fulton, Arkansas on the Red River. From Fulton, another American Indian trace followed the Red River to Natchitoches, Louisiana.

Southwest Trail was a general term for a network of trails linking St. Louis and Ste-Geneviève, Missouri to the Red River Valley of Texas. European American pioneers improved and expanded the older route. At the time of Americans' first settling the Texas territory, the Red River was the border between Mexico and the United States.

Little more than a footpath before Arkansas became a territory in 1819, Southwest Trail became a major immigration route in the 1820s. By the 1830s more than 80 percent of the Arkansas territory's population had entered through the Southwest Trail. The U.S. Army improved the military road during Andrew Jackson’s presidency.

Usage of the trail north of the Arkansas River declined in the late 1800s, but the trail south of the river remained in use decades longer.

From the St. Louis and Ste-Geneviève areas, the trail passed through Wayne County, Missouri. The Indian trace was the southern route of two followed by Cherokees and their enslaved Africans during the Trail of Tears.

From its origin as a footpath, to a series of rugged roads, highways follow much of the route today. Southwest Trail enters Arkansas on Arkansas Highway 166, north of Maynard, (Randolph County). It then passes through communities of Attica, Pocahontas, Imboden, Smithville, Jesup, Strawberry and Walnut Grove.

Two routes were used by pioneers en route to Southside. The older, eastern trail passes through Davidsonville, Newark and Oil Trough. Davidsonville was a pioneer key town on the Black River, but frequent flooding led to use of a newer, western route that passes through Sulphur Rock and crosses the White River at Batesville.

The trail is commemorated in the Historic Washington State Park, northwest of Hope. Washington was a key trading point near the southwest end of the trail.

All content from Kiddle encyclopedia articles (including the article images and facts) can be freely used under Attribution-ShareAlike license, unless stated otherwise. Cite this article:
Southwest Trail Facts for Kids. Kiddle Encyclopedia.