Kids Encyclopedia Facts
This page is about the city in Texas. For the city in Arkansas, see Texarkana, Arkansas.

Texarkana is a city in Bowie County, Texas, United States, located in the Ark-La-Tex region. Located approximately 180 miles (290 km) from Dallas, Texarkana is a twin city with neighboring Texarkana, Arkansas. The population of the Texas city was 36,411 at the 2010 census. The city and its Arkansas counterpart form the core of the Texarkana Metropolitan Statistical Area, encompassing all of Bowie County, Texas, and Miller County, Arkansas. The two cities had a combined population of 65,974 in 2019 estimates and the metropolitan area had a total population of 150,098.

Railroads were quick to see the possibilities of this vast area, and in the late 1850s the builders of the Cairo and Fulton Railroad were pushing their line steadily across Arkansas. By 1874, they had crossed the Red River and had reached the Texas state line. Between February 16 and March 19, 1874, trains ran between the Texas border and the Red River, whence passengers and freight were ferried to Fulton to continue by rail. The Red River Bridge opened on March 20, 1874, and since then trains have run directly from Texarkana to St. Louis.

There was keen rivalry between the 1870s railroad builders. The Texas and Pacific Railroad reached across Texas to the Arkansas state line. The border was the logical place for the different railways to connect. On December 8, 1873, the Texas and Pacific sold the first town lots for the future city. First to buy was J.W. Davis, who purchased the land where today's Hotel McCartney now stands, opposite Union Station.

It is not known who gave Texarkana its name. A popular story credits Colonel Gus Knobel, who surveyed the Iron Mountain Railroad right-of-way from Little Rock to this section to the state line. He allegedly painted "TEX-ARK-ANA" on a plank and nailed it to a tree, saying, "This is the name of a town which is to be built here." 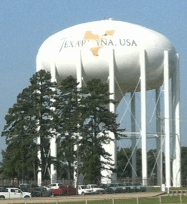 Miller County, on the Arkansas side of the metropolitan area, is probably the only county in the United States that was abolished, only to be reestablished later. Miller County was formed in 1820 to honor James Miller who was Arkansas' first governor. Miller County was formed with a large degree of uncertainty as to the location of the line dividing the county and the Mexican boundary. Consequently, settlers felt that Arkansas levied and collected taxes on land that eventually might be held by Mexico. Moreover, many who resented the oppression of Texans by the Mexicans were openly declaring allegiance to the Texans. This led to general unrest, and after the Texas Republic was created, it grew worse. So, in 1838, Governor James Conway proposed that the "easiest and most effective remedy is the abolition of Miller County to an area which is more patriotic." From that year until 1874, it was a part of Lafayette County, Arkansas. Its re-establishment sprung only from the sale of town lots in Texarkana in 1873. Efforts of the young town to be incorporated were not realized until October 17, 1880, nearly seven years after Texarkana, Texas (June 12, 1874) was formed. December 8, 1873, is generally recognized by both cities as the date of organization.

On the evening of May 22, 2008 a microburst producing winds up to 100 mph occurred over Stateline Avenue and surrounding communities. An analysis of radar data leading up to the damage showed that two severe thunderstorms came together on the south side of the city. One severe storm was moving northeastward from Southern Bowie County while the other was moving northwestward through Miller County. Both storms collided in an area just south of Downtown Texarkana. 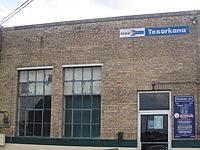 Texarkana Union Station is located in downtown Texarkana along the state line, with daily Amtrak service west to Los Angeles via Dallas, San Antonio, and El Paso and east to Chicago via Little Rock and St. Louis.

Interstate 30 passes through Texarkana on the north. Loop 151 on the west of the city forms part of the Texarkana Loop, a three-quarter loop around the west, south and east of the twin cities with I-30 completing the loop on the north. Interstate 369 shares the western portion of Loop 151. Interstate 49 is a newly constructed interstate corridor on the Arkansas side of the city which connects Texarkana to Shreveport, Louisiana.

All content from Kiddle encyclopedia articles (including the article images and facts) can be freely used under Attribution-ShareAlike license, unless stated otherwise. Cite this article:
Texarkana, Texas Facts for Kids. Kiddle Encyclopedia.