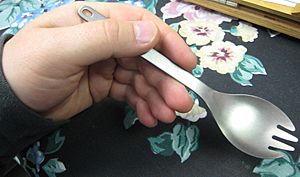 A portmanteau word is made of other words, or parts of words. It comes from putting two (or more) other words together, like motel, from motor and hotel.

Portmanteau originally meant a type of suitcase with two separate parts for storage. The first use as a word combination appeared in Lewis Carroll's book Through the Looking-Glass. There Humpty Dumpty explains that some of the unusual words in Jabberwocky are other words packed together into one word, as two parts of a portmanteau suitcase are packed together.

Portmanteau itself is an example, combining the French words for carry (porter) and coat (manteau) into a coat carrier. Wikipedia is a portmanteau of wiki (Hawaiian for fast) and encyclopedia.

All content from Kiddle encyclopedia articles (including the article images and facts) can be freely used under Attribution-ShareAlike license, unless stated otherwise. Cite this article:
Portmanteau word Facts for Kids. Kiddle Encyclopedia.